I finished laying the hidden yard's tracks this weekend. I've used Minitrix flex tracks, turnouts and point motors. This will not be the type of track used in the rest of the layout (it will be Peco code 55), but I already had this tracks from a previous layout, so I don't have to waste money.... 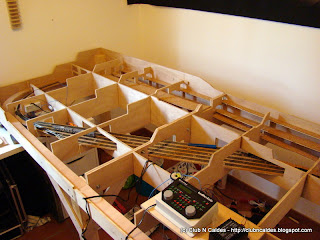 I put 7 detection sections, each one between 20 and 30 cm long: 5 in the end of each track, and two more dividing two of the tracks. This will allow me to store 3 long and 4 short trains hopefully.

TIP: If your detection section doesn't detect if just half of a car has entered (a car is between the detection and the previous section) it's because you used the wrong rail. Try with the opposite or interchange the supply wires and it will work perfect.... LOL 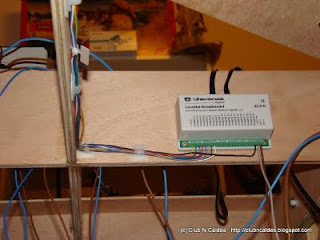