Two months ago I found this train in a shop in Barcelona. I imagine they couldn't sell it during some years, because it was abandoned in the depths of a big drawer and the outer card box was not in a perfect state. That's something usual with Japanese models in Spain, nobody wants to buy them, good for me!!!

But my surprise was to find bulbs instead of led in cab cars, and all my experience until now has been just with led. But finally you will see the only difference is the way you calculate the appropriate resistor, all the rest is similar or easier than led cab cars: 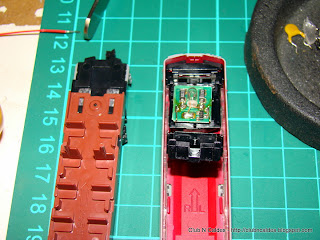 You can see here the detail of the components of the board, all of them in one side of the board. There are two diodes (E225) and one switching diode (C5C). 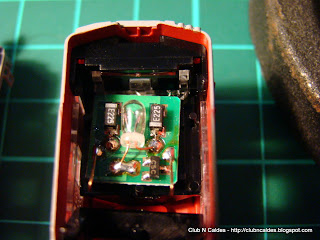 That's the electrical schema of the board. Sorry for this ugly and poor drawing, but I just had Microsoft Paint  installed in the computer from where I'm writing this post: 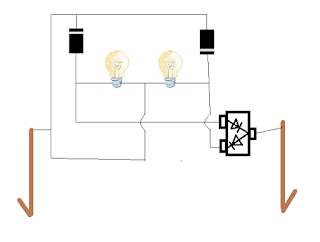 First of all we have to calculate the right resistor to use for glowing the bulbs in the right way without blowing them, because depending on the central station you are using it can supply more than 12V. You know the formula for that: R = V / A

Let's find first the amperage consumed by the board. With a traditional N scale 12V transformer and connecting the tester in serial, we can see it consumes 50mA: 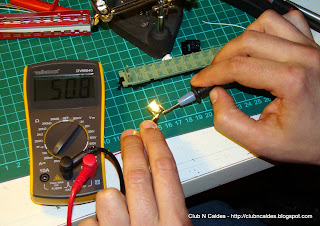 We measure also the voltage supplied by the decoder in the outputs, in my case is 18V that we have to drop to 12V with the resistor: 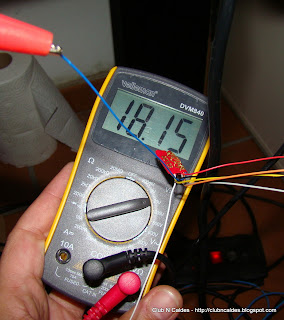 Now it's time to remove all diodes and components from the board, and leave only the bulbs. I also removed the current pick up arms and soldered the red and black wire of the decoder directly to the brass strips. My first idea was to take the decoder's supply also from the board because it has a kind of "current pick up arms", and it's possible to do it if you are just a bit skilled, but it's not my case and I couldn't find enough room for all wires.

That's the board finished. I used a SMD resistor to save space, soldered in the point where bulbs legs are joined. 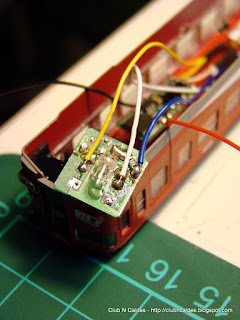 The final assembly with interior lightning, using two diodes and a resistor, a good solution if your decoder for the cab car has only two outputs. 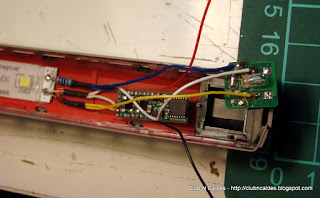 In this case I used a Doehler&Haass DHF250 decoder. Seems too large, but on the other hand it's only 2 millimeter thickness, so it's really easy to hide under the roof. A cheap and really good decoder.


Published by Dani - ClubNCaldes No comments:

This week I'm busy doing DCC conversions, I needed to rest a little bit of track laying. Mangattan Liner was running without the cab and end cars, so it's time to complete the DCC conversion of this train. In this case I decided to use a Digitrax DZ123 decoder. It makes a little bit more complicated the conversion because I have only two outputs (and I want to lit three lights: front, rear and interior lighting), and also because this decoder is not polarity switching capable. If it had the last thing, I wouldn't need to modify the led board.

Let's start opening the frame, like all other EMUs (pulling with the help of a thin screwdriver) and removing the screws of the bogies: 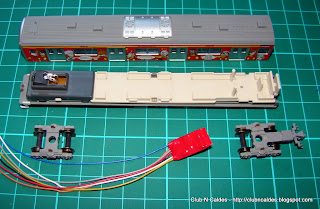 The led board is also protected by a plastic cover, clipped to the seats plastic board. That's the led board from the top and bottom: 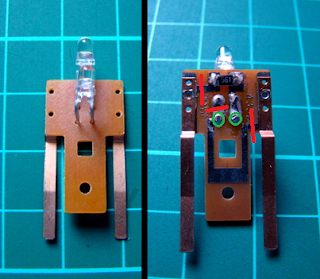 First you have to unsolder the rear led (see the green circles in the photo) and turn it bending the legs in the opposite direction. In the original board the positive leg of one led is soldered together with the negative leg of the other. But I'm not using a switching polarity decoder capable, and the common wire in Digitrax decoders is positive. That's why I turn the rear led, in this way the positive legs of both leds will be soldered together with the resistor. And last, I do three cuts in the tin tracks to aisle the negative legs of both leds and the current pickup (see the place where to practice the cuts in red). 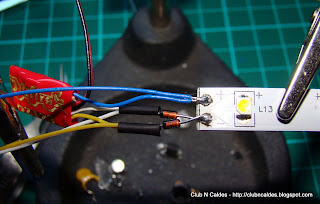 On the other side, I'm preparing also the led strip. My idea is to connect decoder outputs first to the led strip, and from here derive the needed cables to the led board for the front and rear lights. As there are only two outputs, and none of them is always active (they are directional), I'll connect both white and yellow outputs to the led strip protecting them with two standard 1M4148 diodes.

CAUTION: In the photo above I forgot to add also a resistor in the positive wire, it's solved in the following photos!!

My previous error forgetting the resistor makes me remind you to test each step of the conversion. Use your tester to check continuity in the cuts and be sure they are well done before soldering, and connect decoder to the track like in the following photo to test each conversion step, light intensity, .... never forgot to test and check everything twice!!! Do not solder or fix something before being sure it works perfect. 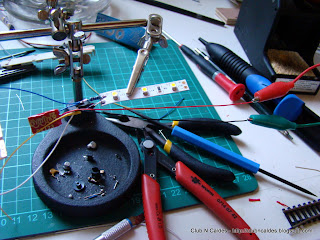 You see I only use half of a led strip (3 led) for cab cars, so I can fit decoder also in the roof. I practiced a hole in the led plastic cover for wires: 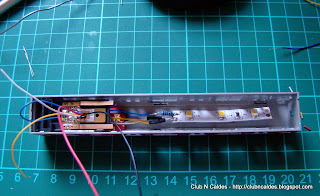 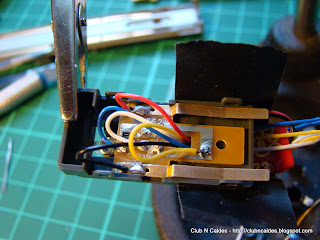 And that's all, may be you have to make a bit of pressure to close the hull with all wires, decoder, resistor and diodes.... but that's something normal in N scale.... 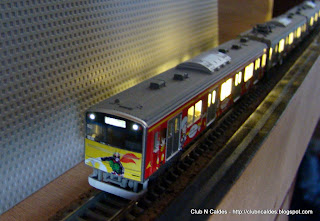 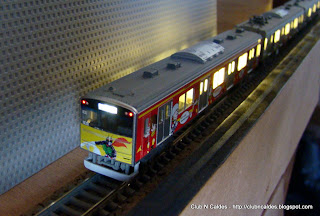