This will not be a long post as this model is DCC ready, but it has some differences from other Kato DCC ready models that caused me some troubles. May be I can help someone not facing the same problems writing this post.

About cab and end car, there is no problem at all. Just open the window in the bottom part, close to the front bogie, and insert the Kato decoder FL12. You don't need to remove any plastic part, normally used as a lights switch, like in DCC ready EMUs.

But when you take the motor car and open the window, don't try to insert the EM13 decoder, because it will not fit. If you try it, probably you will brake it or it will be very difficult to take out. So first of all you need to unclip the upper part of the body. After that, you can unclip also the lower grey part of the body to access the motor.

But stop!!! Don't try to insert the decoder yet!! This model has a dummy decoder that you must remove before. After using some of this decoders in different trains, I never found a dummy in the motor car before. 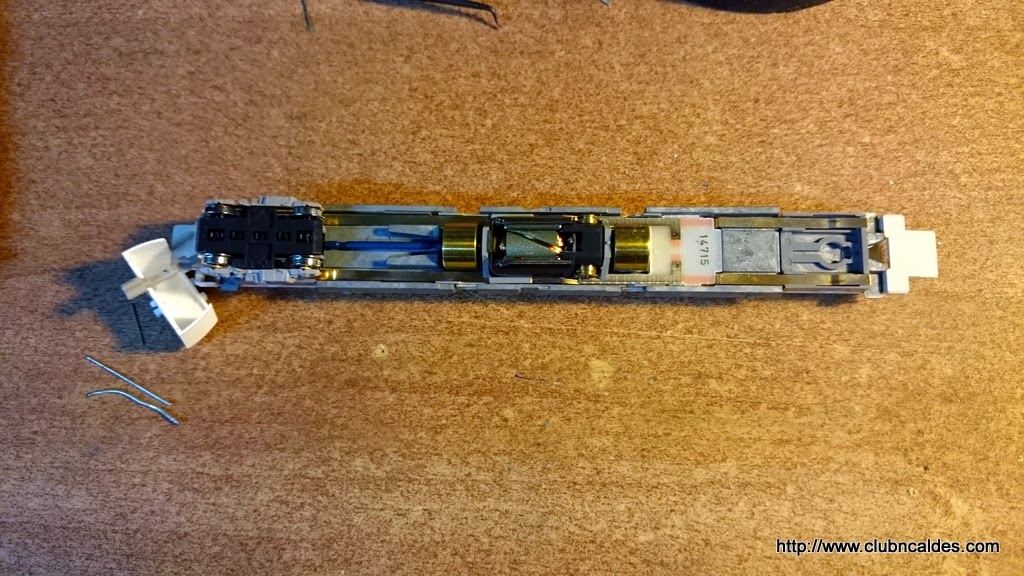 I don't know if it's it's easy to see the dummy, or may be that day I was really sleepy, but I didn't see it and I fought with the car until I inserted the deco, but then it was impossible to fit again the body.

Here you can see the dummy removed: 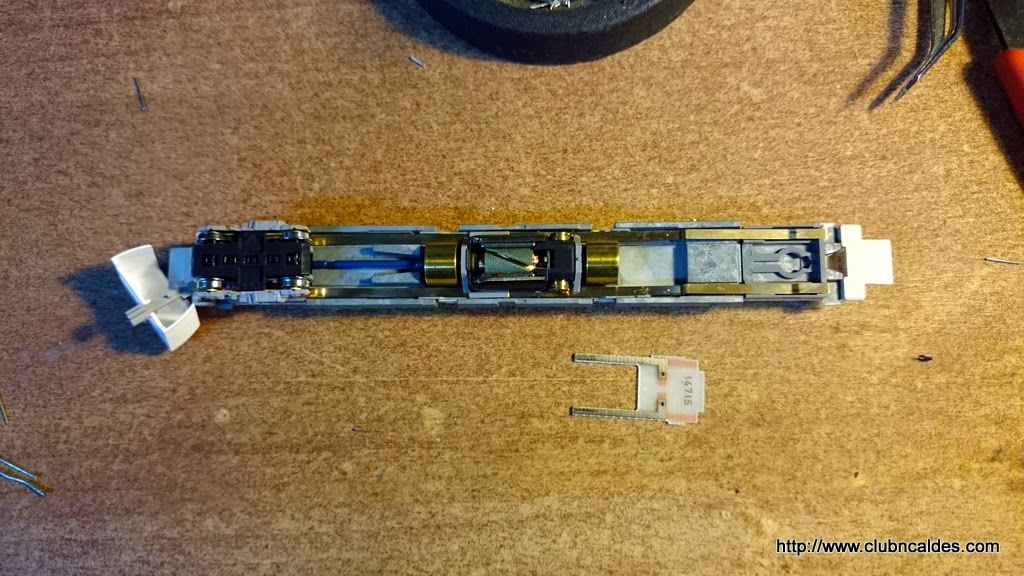 And finally the decoder properly fit in place: 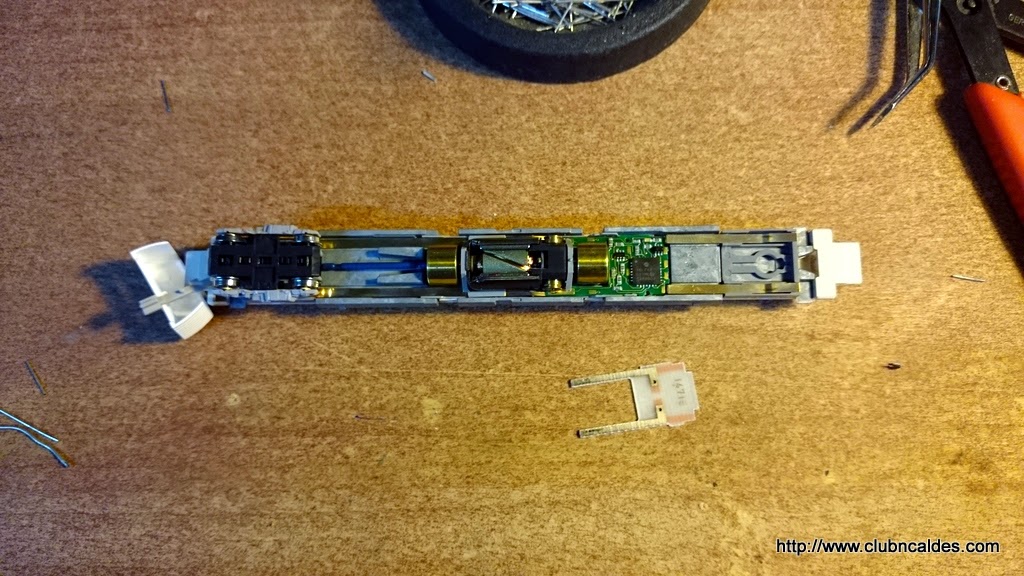 And the N700 is ready to run in a digital layout:

This is the old model from Kato of EF57 (article number 3003) with pantographs on the edge of the car, not in the center like EF57-1, and a big and beautiful deck on each side.

According to Wikipedia: "The Class EF57 (EF57形?) of 2-C+C-2 wheel arrangement DC electric locomotives was a development of the previous JNR Class EF56. The 15 EF57s were built between 1939 and 1943 by Hitachi and Kawasaki.

Introduced on Tōkaidō Line passenger services, they were seen at the head of expresses such as the Tsubame, complete with train headboard mounted precariously on the front of the cab decks. With the introduction of the newer semi-streamlined EF58s on Tōkaidō Line services, the EF57s were transferred to the Tōhoku Main Line. At the same time, their steam-heating boilers were removed and replaced by electric-heating generators. The class remained in use on long-distance express trains on the Tōhoku Main Line until the 1970s." 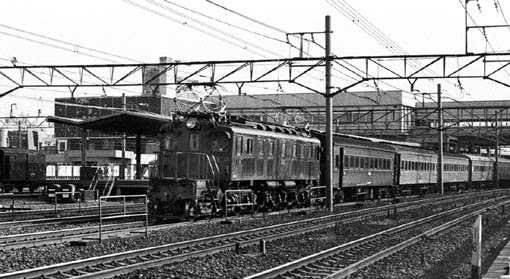 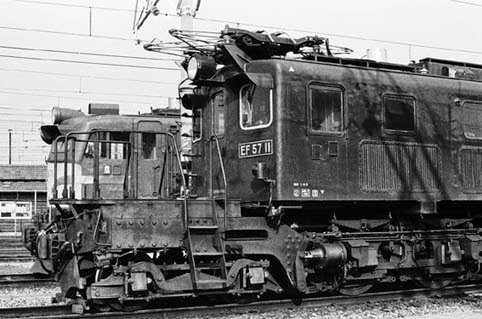 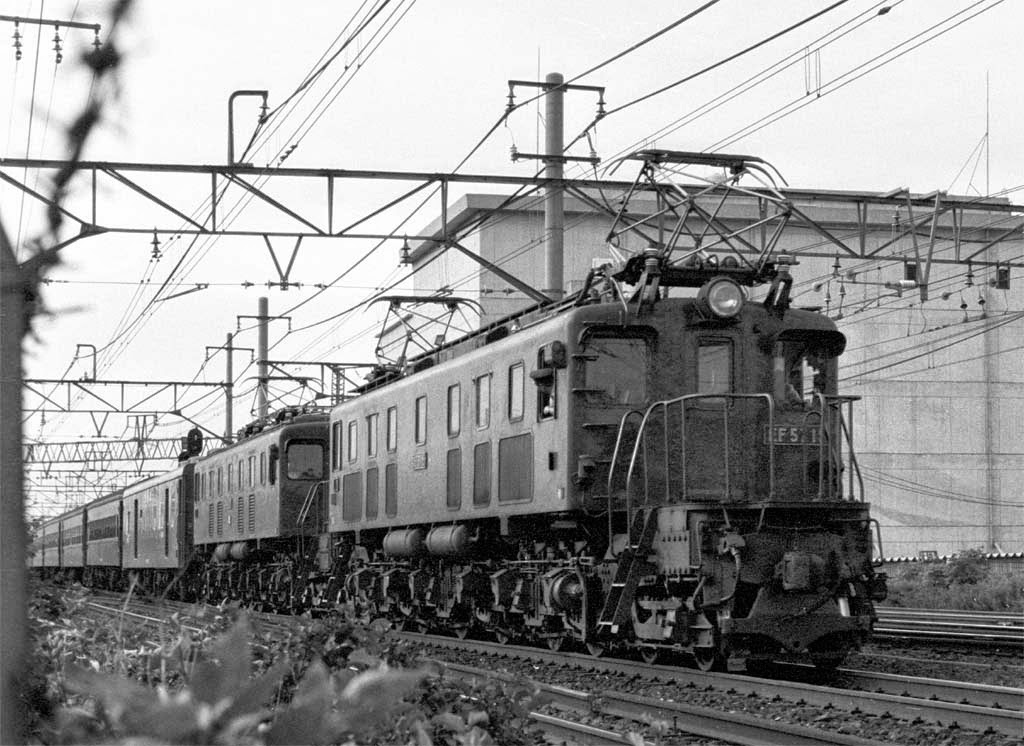 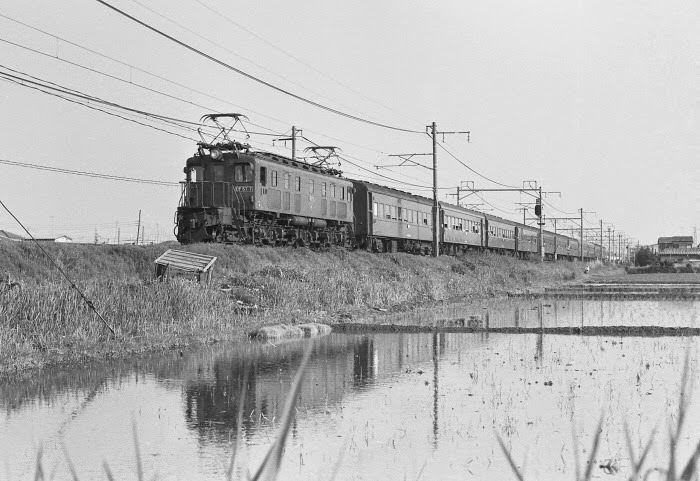 Digitalization seems difficult when you open the locomotive and see it's a complete lead block with motor and transmission fitted inside, but it's not so complicated. The decoder used has been a Doehler & Haas DH10.

You need first of all to sand and smooth down both lead blocks so the cooper bar of the motor is visible. It's indicated in the following photo: 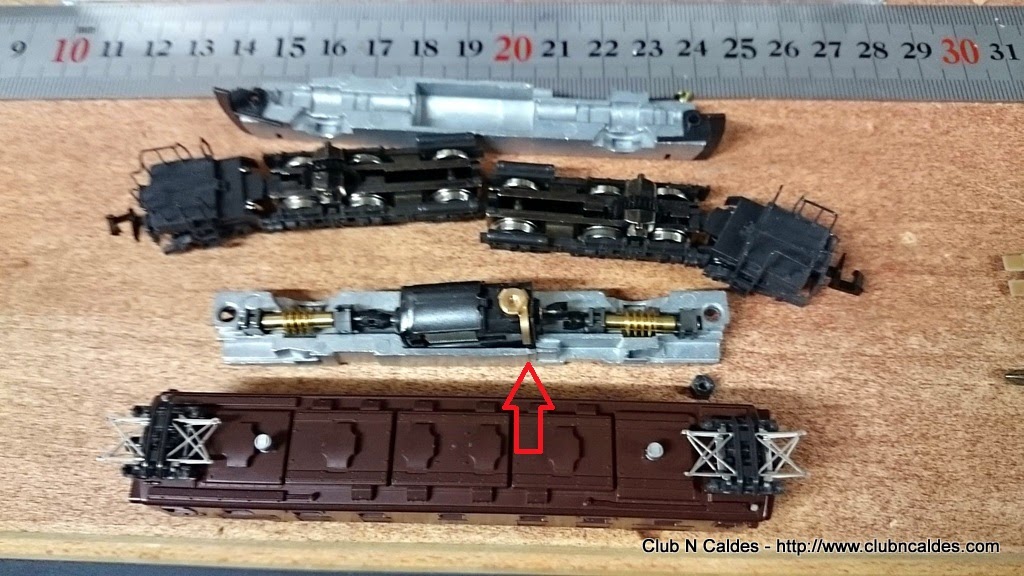 Then isolate the motor, wrapping the part of the cooper bar with Kapton tape. For security, I also put Kapton tape in the lead block. For the decoder there is a little squared hole on top that you can make a little bit bigger to fit it. Both places to file down are indicated in the following photo: 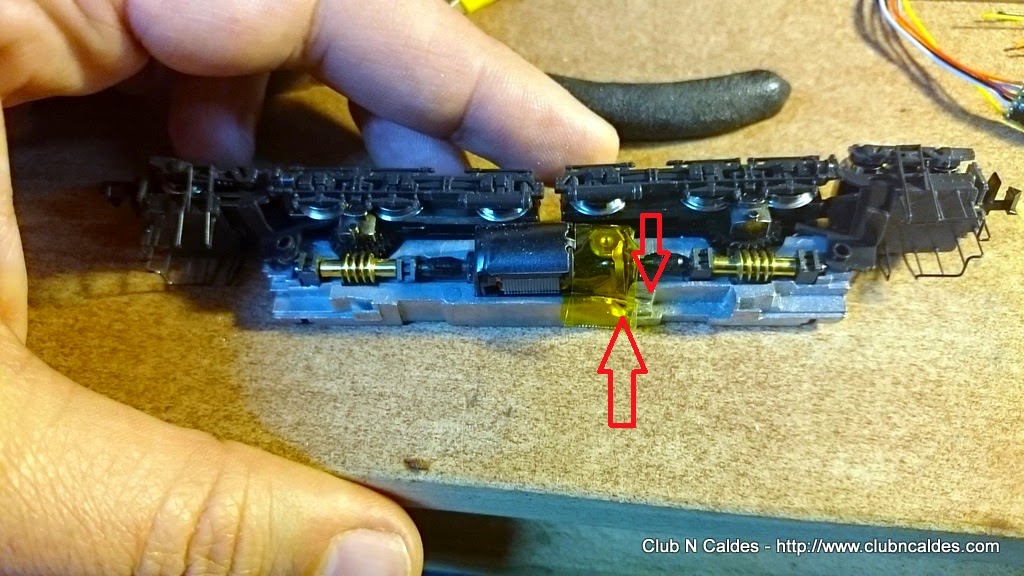 Remove the Kapton tape of the edge of the motor cooper bar just enough to solder the decoder wires. Make sure it will not touch the lead blocks. Isolate also with Kapton tape the decoder and install on place.

Lights are mounted in a little board. Isolate one of the contacts of the board, the one having the long track. This is where to solder decoder wire. The other contact is not isolated so the common phase of the current is taken directly from the chassis and no "blue wire" is used. This makes the lights to glow at half intensity, but for me that's perfect because I found lights to be too bright.

Red and black wires to take the DCC current to the decoder can be taken also from the light boards in the point not isolated. It's not possible to solder them to the lead blocks, and that makes possible to dismount and mount again the locomotive if necessary without the need of unsoldering any wire. 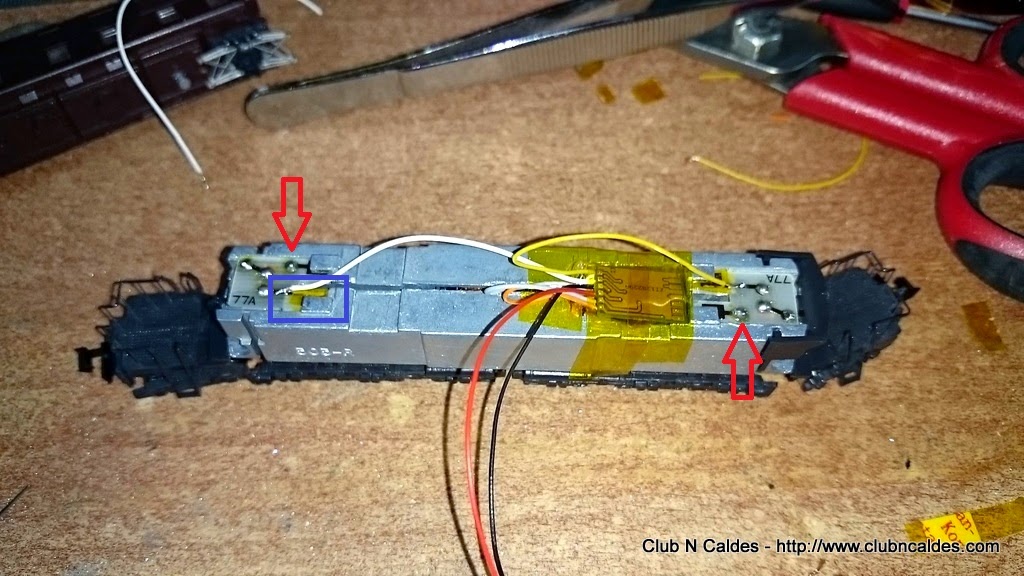 Here you can see the EF57 finished:

There is a new model railroad market established regularly in Barcelona. It's held in Estació de França every first Saturday of every month. It differs from Masadas market in that it's exclusively dedicated to model railroading stuff, and not slot cars nor other hobbies.

That's their argument to say they are not competence for Masadas Market, but taking into account it's held with the same periodicity but exactly the day before, seems difficult to believe.

First of all the location of the market is perfect, inside the most beautiful train station of Barcelona: 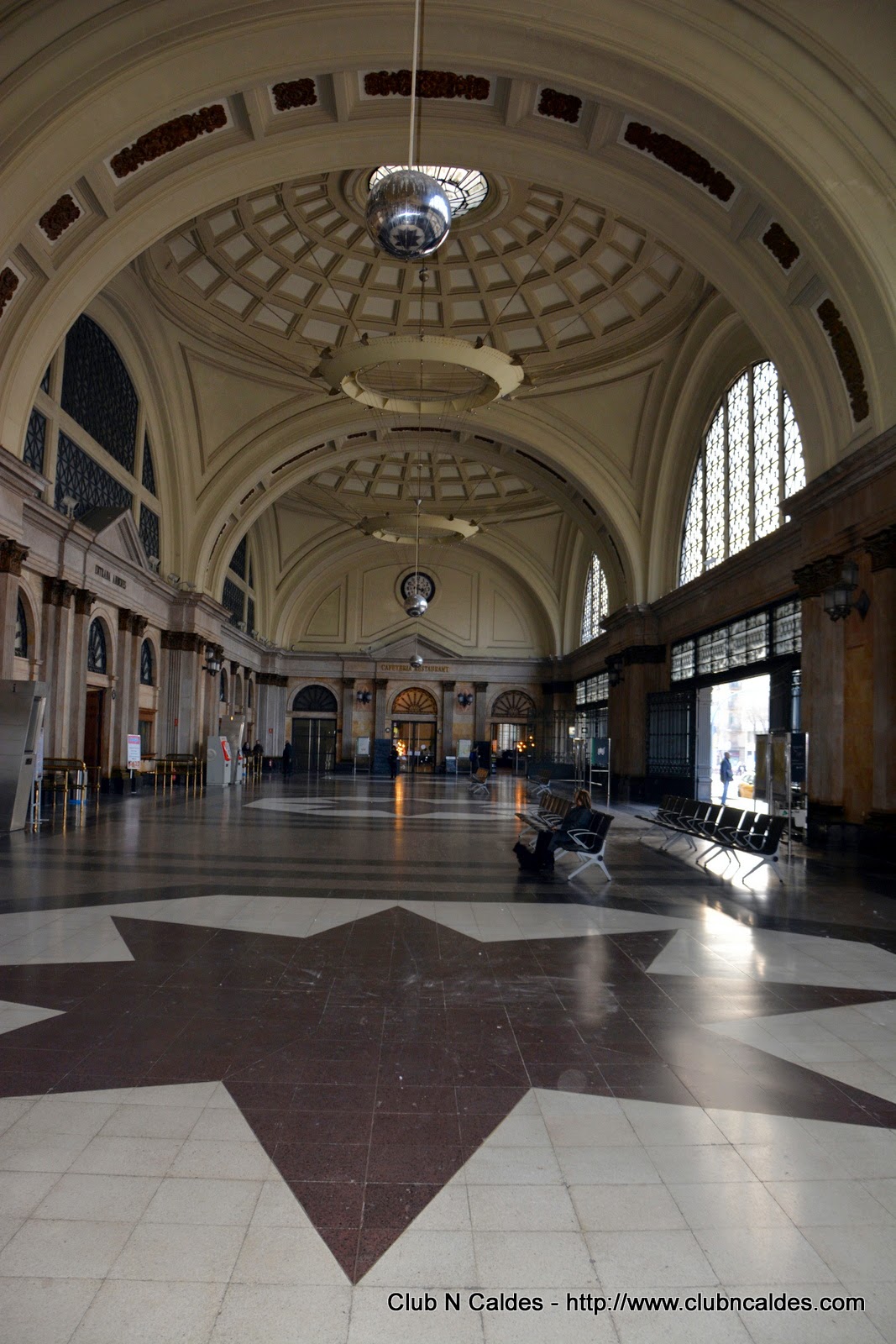 You can admire the architecture and see also the trains: 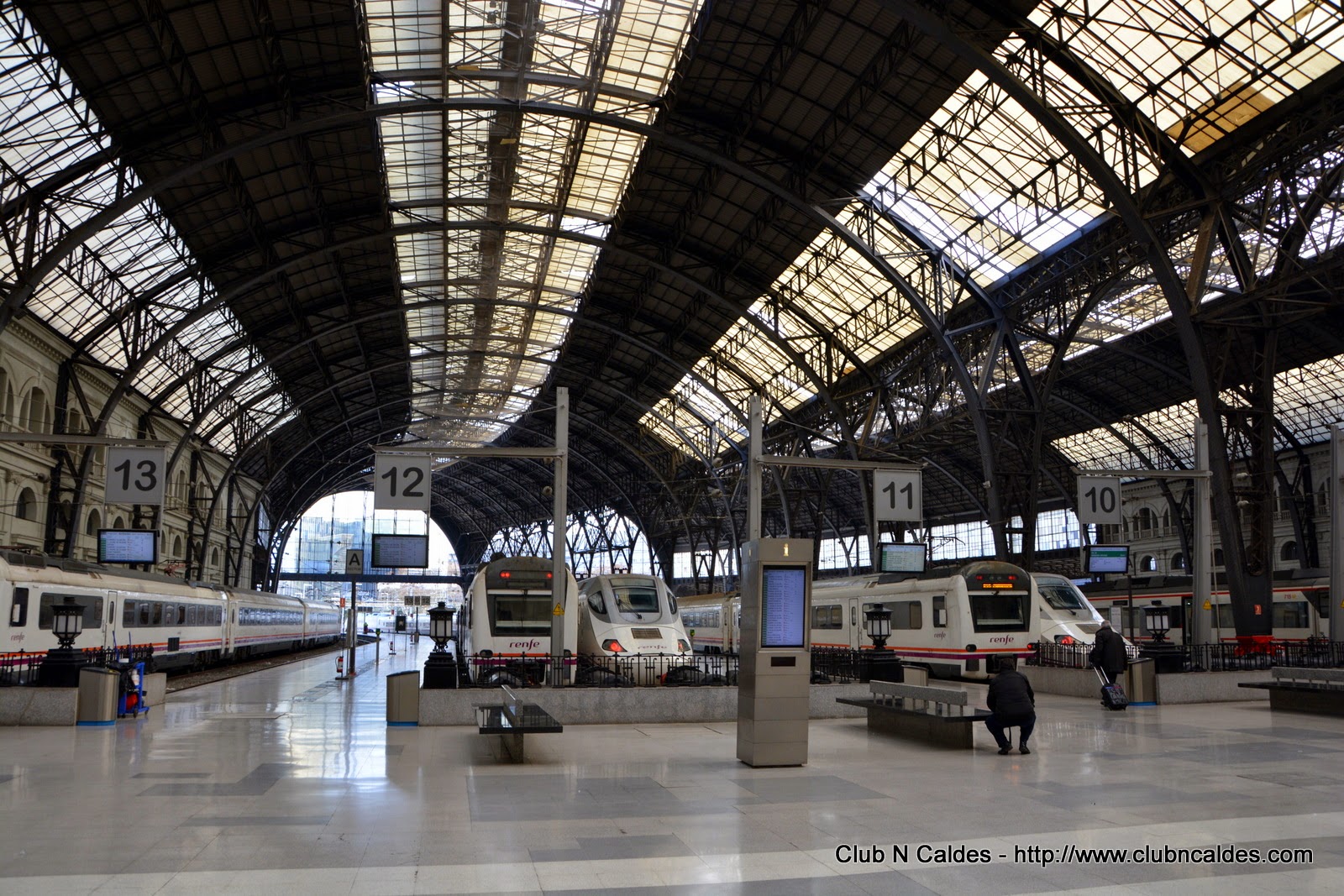 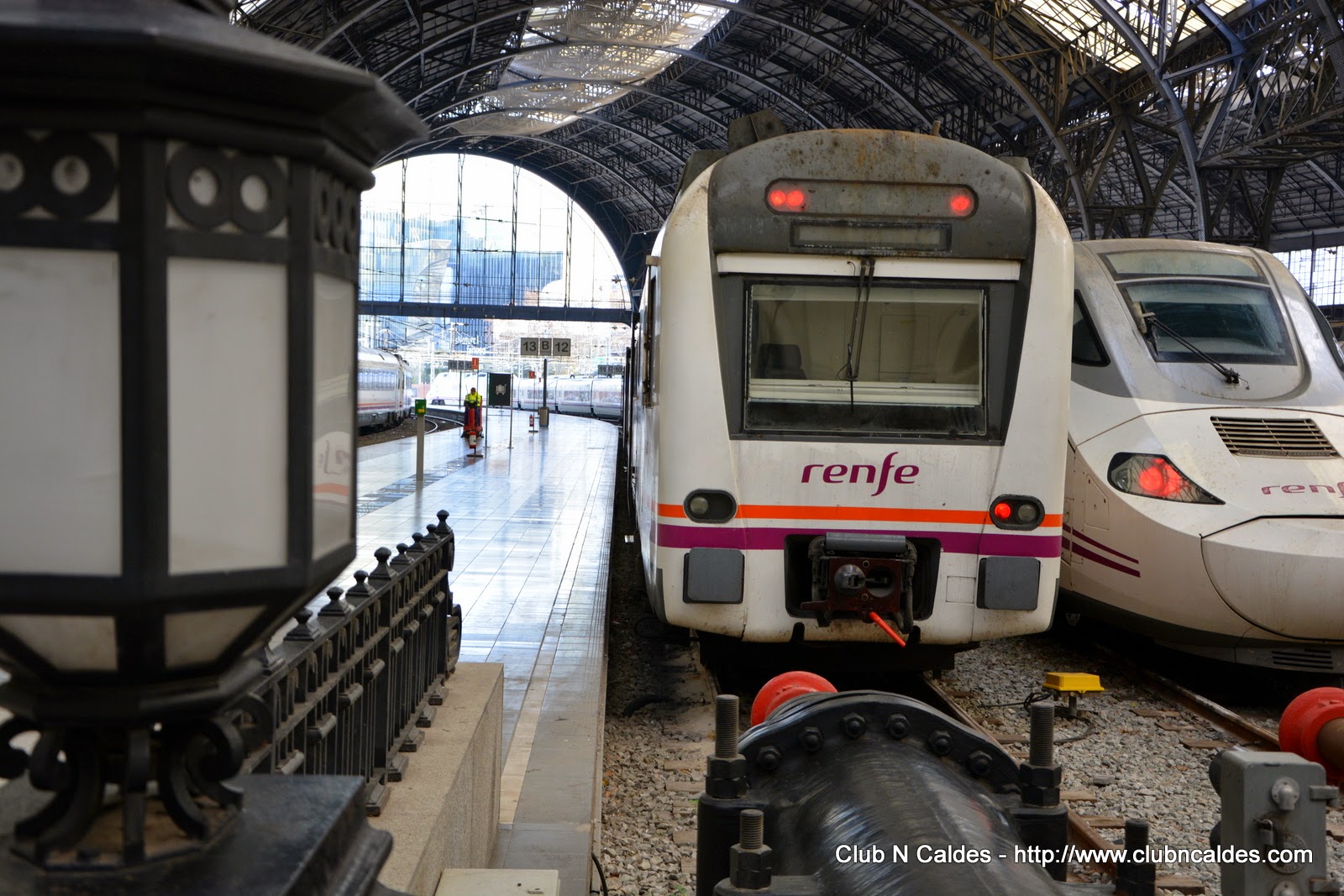 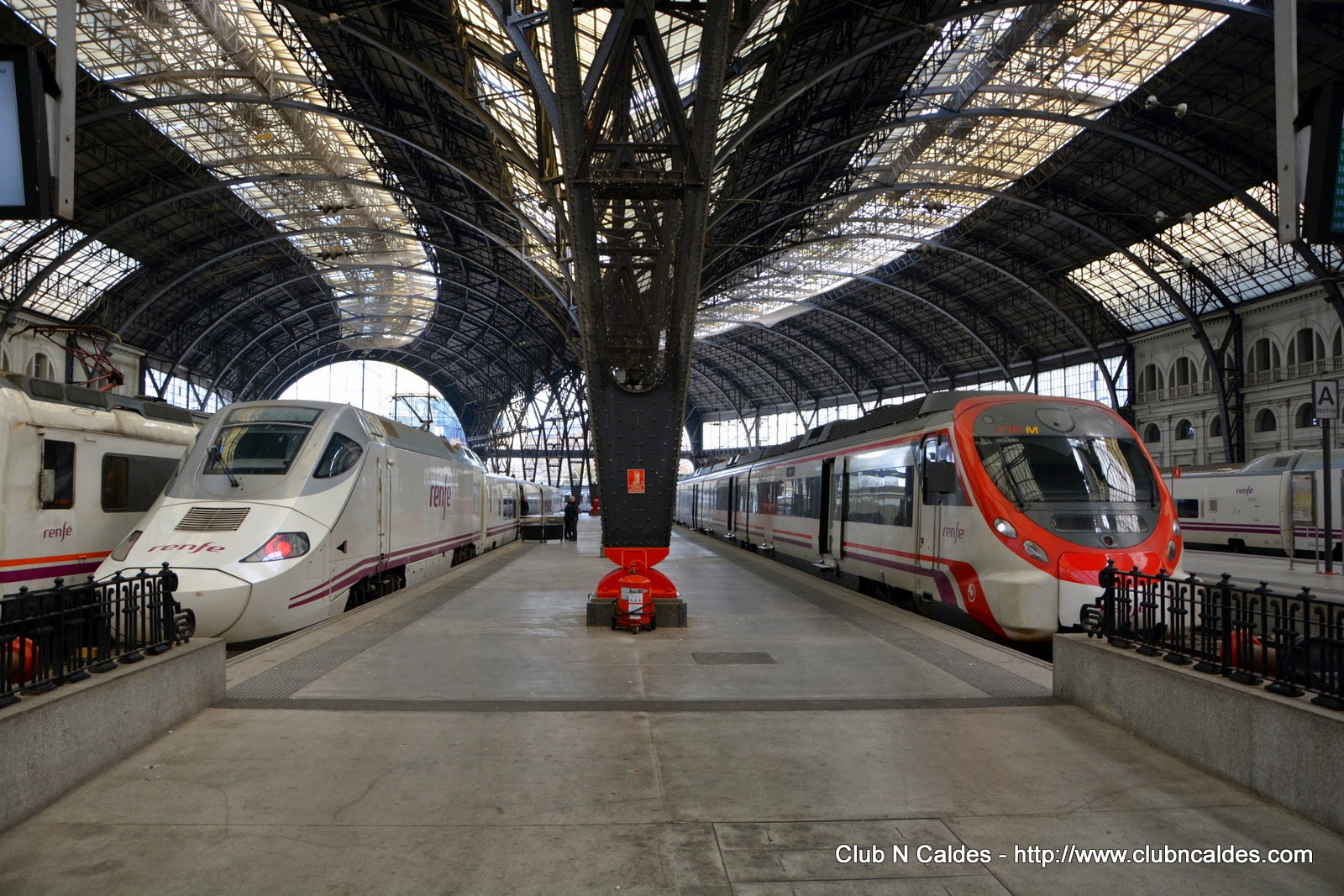 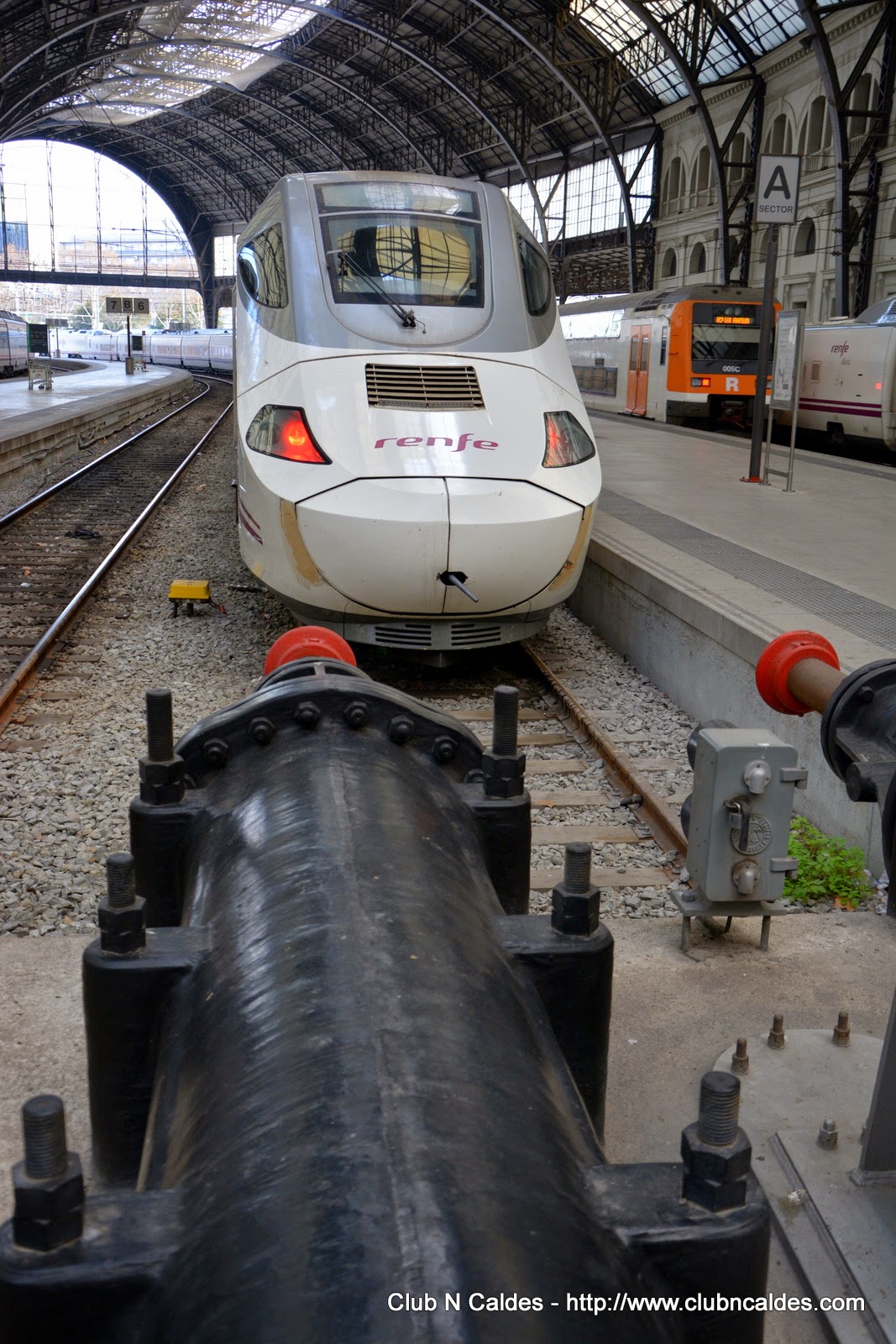 Stands are inside the coffe shop / restaurant of the station, what means you can take a look to the offers with while drinking a beer or coffee, depending the hour: 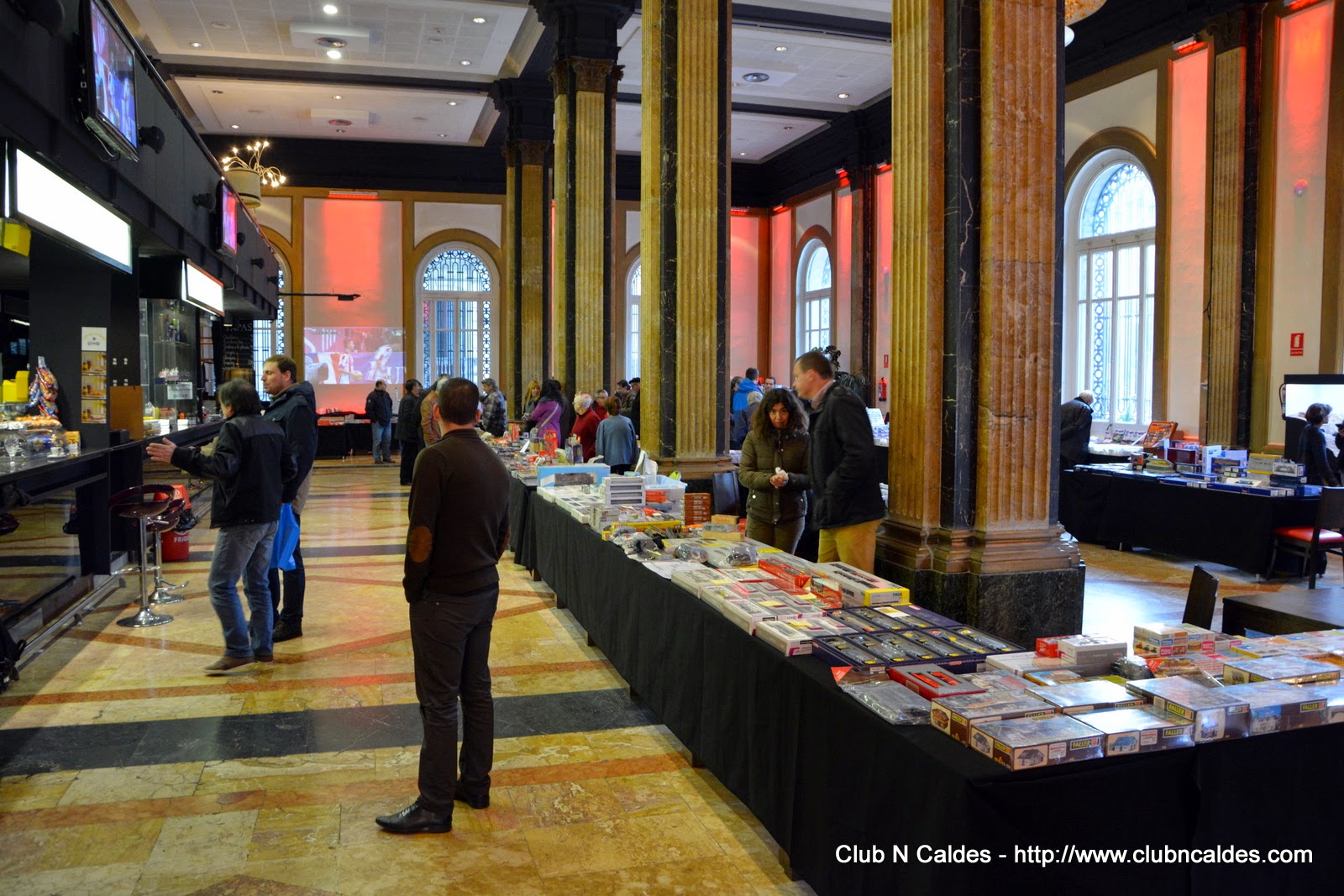 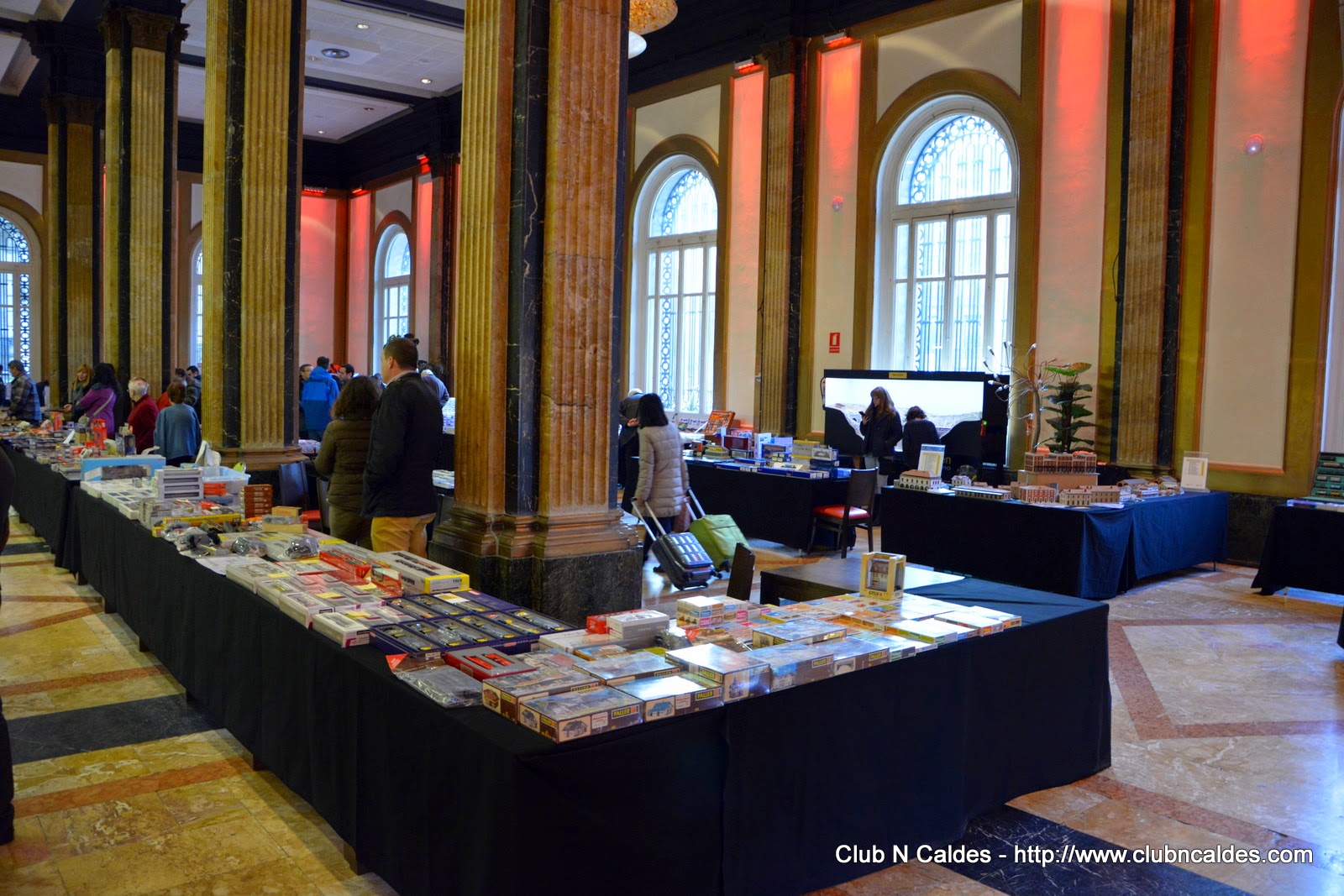 There are just a few sellers, but prices are moderate and according to the market. There are no super bargains, but neither stupid prices for second hand models. It doesn't look like Masadas, where in my opinion there is a little Mafia selling second hand things at double price of the same article in new condition.

I don't mean all stands in Masadas are like this, they are just a few, but are destroying the reputation of Masadas market. I've had really bad experiences with some of them (not only particulars, also a very big and well known shop of Barcelona having a stand there) who lied me and sold me a second hand train assuring it was new. It was a series 800 shinkansen with no pantographs (they were assuring it was like that) and no stickers. I also see every time in Masadas some articles at four times its real price. And those dishonored sellers try to do it many times with Japanese trains because they can buy them at really low prices (Japanese trains have a very low price compared to Spanish and RENFE models), and trusting nobody knows about Japanese models sell them at incredible profit. But I do know about Japanese models...

So, good second option this new Estació de França market, small but in a perfect location, having the possibility to buy at fair prices (at least in the first edition...)