I needed a small rural station for my layout, and decided to buy Tomytec Station A. 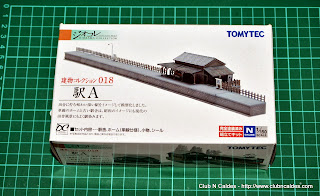 It's a nice kit already painted and weathered, nice detailed. There is no need of glue to mount. 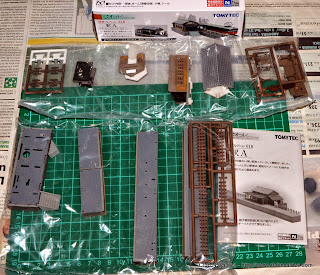 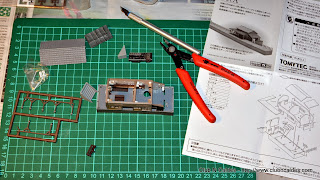 For lighting, I took my fantastic Chinese book of SMD led and resistors that I bought in ebay for no more of 30€. There are thousands of resistors of all values and also a great range of capacitors. Leds are from LedBaron, also in Ebay. It's a bundle of sunny, golden and super golden white leds, plus some red and two-tone red/green. 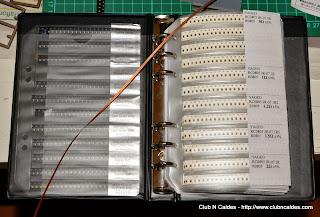 I also have special brass strips to mount led and resistor. These strips are really handy and you can bend them to fix it in any position. 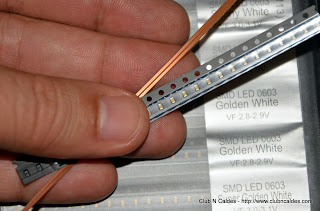 After measuring the needed length of the strip, I made a small cut to place the resistor on it. 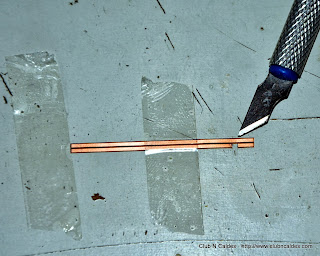 With a very thin tin wire prepare the place for SMD components: 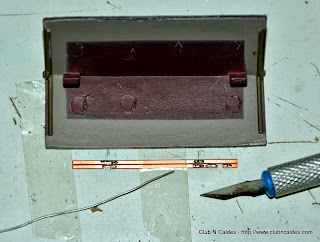 About SMD leds, they seem very hard to solder because they are really small. But the only difficult thing is not to loose them. I always need more than planned because one of them falls in the floor or gets lost under the junk of my table. Under the SMD led there is always an arrow, it shows the polarity: 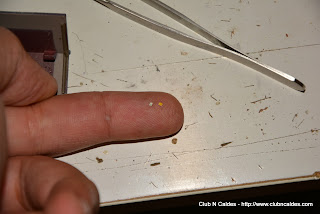 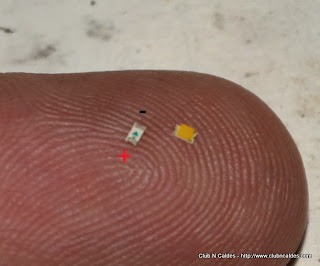 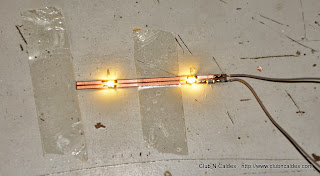 And the final results in the Tomytec Station A: 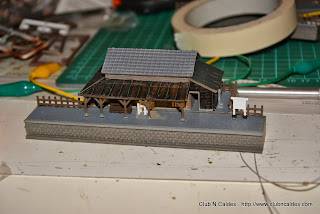 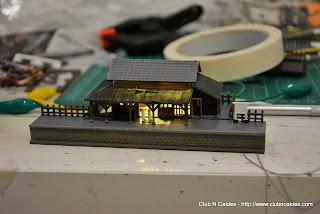 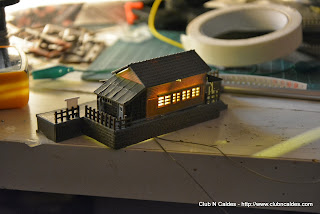 I'll add some aluminium foil next to the lights because is's too visible through the walls, but nothing else to add. A nice and easy kit.

Today there was en event in Santa Eugènia de Berga arround trains and train modelling. It was organized by magazine MasTren, it was not as big as ExpoTren (in Lleda, a big city, not a small town like Sta. Eugènia de Berga), but nice to see and with lots of participants.

There was a real small steam locomotive from Ferrocarril del Vallparadis (Terrassa) for kids, in a small straight track, at the beginning of the exhibition. I have always admired those train modelers who build big steam locomotives able to move a full trail with people on it: 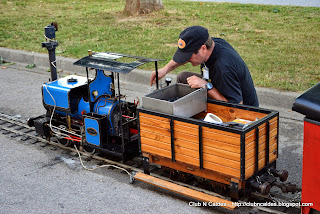 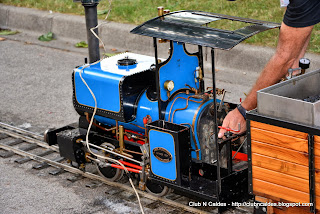 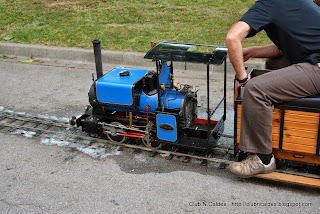 After this little track there are a lot of manufacturers and distributors stands. 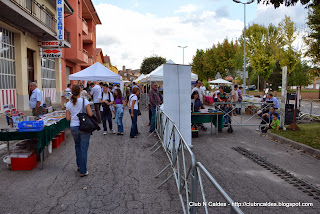 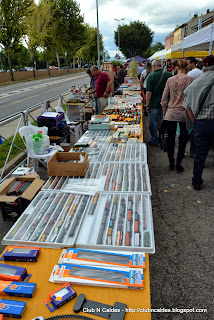 I had to stop in front of a brass locomotive. That's a strange article in Spain, and I would love to build one of those myself in a future. I heard in Japan there are several builders, may be one day I can get one to build:

I also stopped in front of Zaratren stand. They sell Tomix and some other japanese products, apart from all their good articles. I recommend their led strips for both analogical or digital cars. 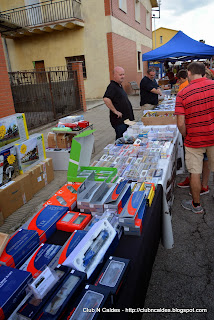 And I had to buy some freight wagons from Tomix, they where really beautiful and at a very good price!!!! 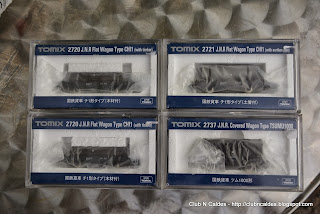 Another thing that surprised me in other stand is this kind of precise and complicated mechanism to hold a locomotive... I don't know if there is the need of so sophisticated mechanism... but looks really professional: 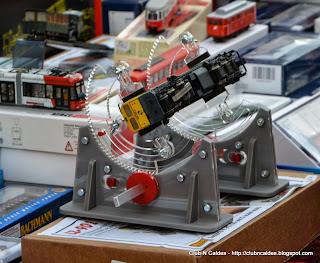 And the best for me, it was Marklin stand. No locomotives, no articles, no layouts nor models, just some catalogs and two red carpets for kids to play with two ovals and a pair of battery locomotives. That's best way of making new fans of this hobby and denotes a high interest for its continuity. Something to be proud of. 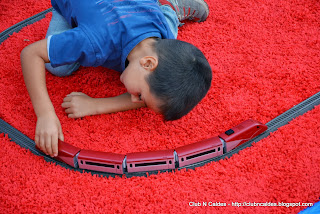 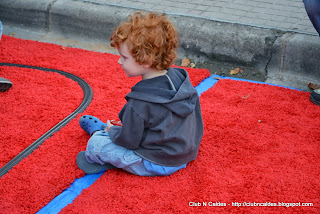 In the middle of all stands there where two modular layouts, one in N scale and other in HO. These photos are from N scale layout: 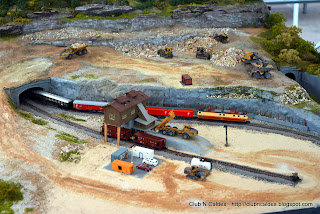 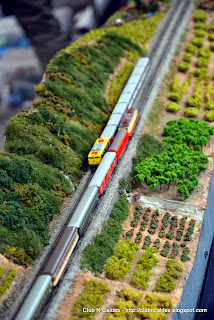 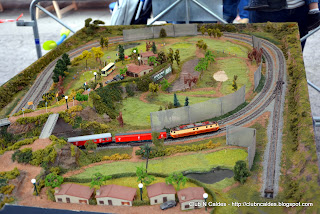 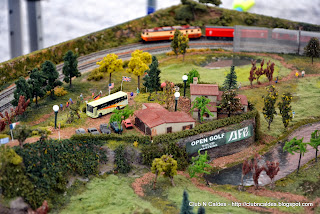 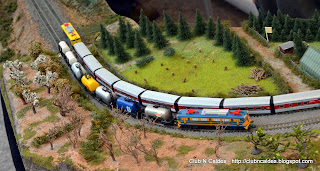 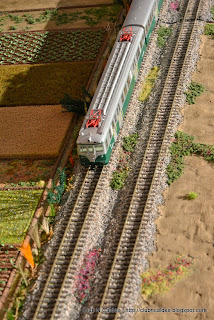 The reason to make this train show in a really small town is this building: 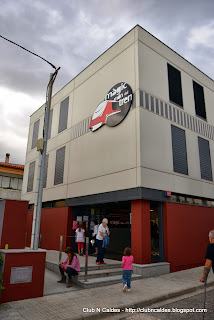 Màgic Mon del Tren is a huge layout oppened to the public. You can see it has a entire building dedicated, but today it was too much crowded to go inside and enjoy it, so I left it for another day and have another post to write to all you.

Health, happiness and many trains for all!!!