After testing lights and make sure they have the desired effect, I masked the windows with white glue (as I did with the TIE Interceptor) and filled the inside of motors with cotton to protect the red led.

As I want to do some chipping effects, the first coat of paint will be metallic iron. When paint is dry, I applied also a coat of varnish for protection: 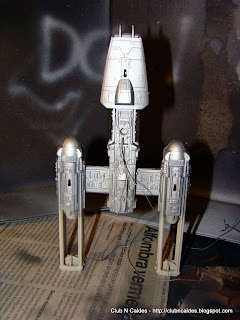 The base color is made with white, 1/4 light gray and a bit of sand. When it's dry, you can scratch it softly with a thin blade and the metallic color will appear where you want to show some chipping. That's why I varnished the first coat, or the scratch would show the directly the plastic instead of the metallic paint. 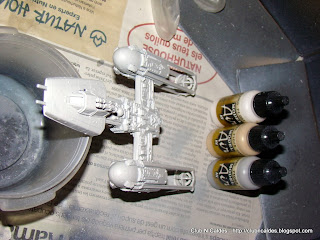 I had a problem with decals. I broke them trying to put them in place, so I masked the area and airbrushed. Finally, it was a good decision because the effect is much better than with decals: 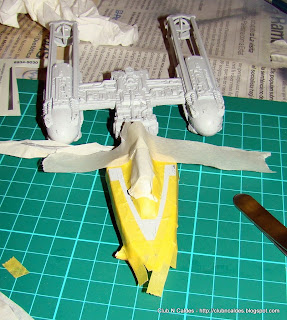 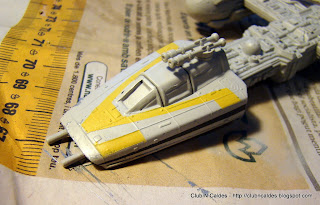 Again, after the base color is applied, I airbrushed a coat of gloss varnish. This has a double advantage, first one is that it can be used as a "restore point" if the weathering effects are wrong, and second it helps to flow the paint to do the paneling and shadows. For this paneling, and weathering effects in general, I use oil colors diluted in turpentine. It's not aggressive with the base of acrylic varnish and it has a long drying time which allows to work with the paint in a comfortable way.

Paneling is done mixing a bit of oil dark grey color with turpentine and with a very thin brush trying to deposit the paint in all slots and edges. Thanks to the glossy surface of the varnish it flows along the lines giving depth to the model.

Another good effect of dust can be accomplished putting a dot of oil color and slip it with a brush damped in turpentine until it has the aspect you want. 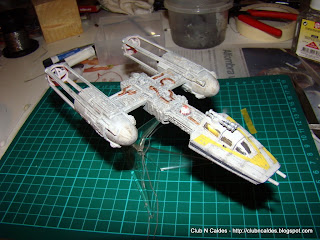 But my big (and common) mistake this time was again the IMPATIENCE!!! You cannot paint completely a kit in one afternoon. You have to leave it after each coat, and see later if it needs more effects or corrections, and work always with completely dried coats. So the final effect was simply a global dirty. If I had stopped at half of the work, the final model would have been really good. 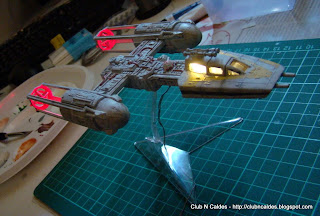 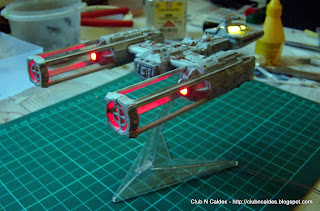 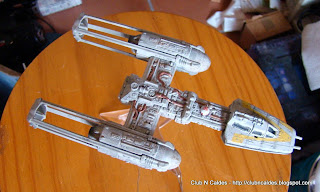 I've installed a red led in each motor. I cut a piece of from the plastic frame that supports pieces and used it to glue the led exactly in the middle of the motor, facing to the outside. 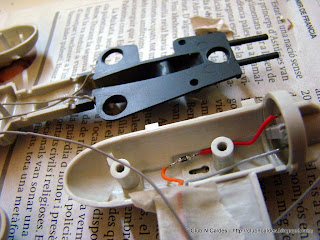 Resistors were bought also on eBay. I found a Chinese "Sample Book" with thousands of SMD resistors. That's the test of the motors: 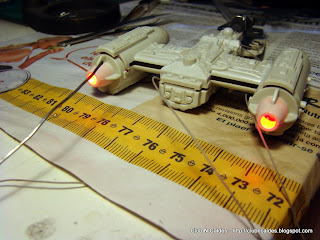 And the white led installed in the cockpit: 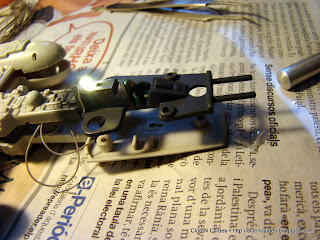 And this is the final montage of wires. I drilled a hole next where the stand will be fixed for the supply wires and centralized all cables there. Is needed just to sand a little bit the borders of the frame to pass the wires and the hull closes perfectly: 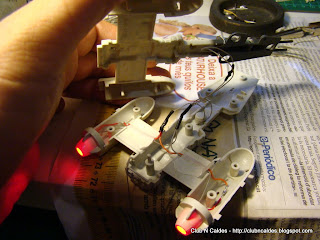 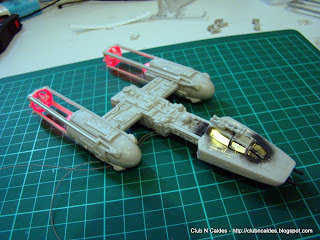