Let's see my installation from a lower level. You could see the logical schema in my previous post, and now I'll explain how is everything connected in a more physical view: 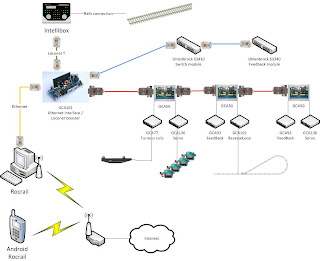 The most important connections are the following:

GCA101 has two RJ12 connectors for standard Loconet modules or devices. Here is where you will connect Intellibox. But remember to remove both jumpers from GCA101. These jumpers must be removed always if you connect an "active" loconet device (Intellibox, Twincenter, or any other central station supplying current or Railsync signal to loconet bus).
For more security, I suggest you to make a special Loconet cable without connecting pins 1 and 6 (the outer pins of RJ12). The other wires are connected pin to pin (2 to 2, 3 to 3, ..). You can also take an existent Loconet cable and cut the outer wires.
The correct connector to use in Intellibox is Loconet T. The other Loconet B is used to connect to a booster if necessary, because it provides the railsync signal.

If you are mixing standard Loconet Modules (from Uhlenbrock, Digitrax or any other brand), they can be connected to the remaining RJ12 connector in GCA101. One is occupied with Intellibox (or any other central station), and the other is the starting point of your standard RJ12 Loconet bus. Just use standard and plain (pin-to-pin) RJ12 cables.
Standard modules can be connected also to Intellibox Loconet, but it's much better to keep the central station just to move and give orders to trains. GCA101 has much better processor power to manage messages than the central station.

GCA50 also shares the Loconet Bus, but it uses a different connector. Standard Loconet buses use RJ12 (telephone connectors) as said before, but having only 6 wires you cannot carry all signals. That's why Intellibox has two different Loconet connectors:


Using a DB9 connector (the same used for RS232 in PCs), you can carry all signals and power to the modules. GCA101 has two of these connectors from where you extend Loconet bus to all your existing GCA50.

Standard full wired male to female 'extension' Rs232 cables can be used, but it's not recommended because they cannot carry all the 3Amp. power from GCA101. The best way is to use Ethernet Cat5 wire with the following pinout: