For those having Intellibox as the heart of the installation, I'll show you how to adapt Giling modules to your Loconet BUS. I started using Uhlenbrock modules, but due to its price and lack of functionality (mostly in servo modules), I decided to change to Giling Loconet modules.

If you already have Uhlenbrock modules (or other Loconet modules), is possible to add GCA50 as any other loconet compatible module. That's how I started: 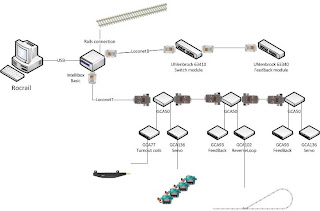 You can see GCA50 is just "half" loconet module. It's an interface between Loconet BUS and any other interface module. Instead of investing in electronics in each module giving them a Loconet connection, you plug a GCA50 and combine 2 interface modules as you need: reversing loop module, switches or lighting module, servo management, weel counting....

And the final schema I'll have in my installation is the following: 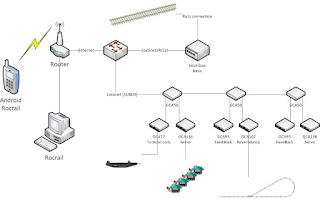 Intellibox has not enough power to drive more than 5 GCA50 (in my experience), and the solution is to add a GCA101 Ethernet interface + 3Amp power source. And your layout will be connected to the net and you'll be able to drive it from any device connected to it.