After some general schematic posts about Loconet and Giling modules and interface, I'll continue with the main Loconet interface: GCA50

Before entering in details, some terminology clarification: Giling page uses the word "interface" referring to both Loconet connection board and I/O boards (those connecting servos, turnouts, current detectors, wheel counters, ....). Sorry Peter, but I find this a bit confusing. I will refer first ones also as Interfaces, but I will call Drivers to the others to avoid confusions. Interface boards connect any kind of Driver board to the communication bus. It can be Loconet (GCA50), or CBus/CAN (CAN-GCA series boards). And Driver boards "drive" servos, turnouts, detectors, lights,....

As my installation began with an Intellibox Basic and Loconet bus, my main board is GCA50. I can insert as many GCA50 boards as I need in Loconet bus. They are fully compatible with any other Loconet modules (now a days I have a mix with Giling and Uhlenbrock modules).

There is just one difference with standard Loconet modules, the connector. Standar loconet uses RJ12, but Giling modules use DB9 connectors (those 9 pins connectors used mainly in RS232 devices).

Quoting Giling words, and I agree with them, the reasons for that are:

1) Units have to be connected / disconnected many times, which is not suitable for RJ12 connectors.
2) GCA would like to have suitable power over the cable, which Railsync is not able to provide.
3) The LocoNet railsync should remain be available.

And I add they are easy to connect as you don't need special grimping tool. Point 2 also helps a lot in wiring because there's no need of more power wires to the modules, everything is embedded in this connector (Loconet signal and power).

Giving a summary: GCA50 is the board connected to your Loconet bus, and you can connect up to 2 driver boards to it for current detectors, switch control, lighting, wheel counter, servo controlling.... And it's also possible not to connect driver boards and use the input/outputs to connect directly switches and leds (to make a control panel). More information on connecting leds here: http://wiki.rocrail.net/doku.php?id=mgv-overview-en#direct_connection_of_led_s

But let's see how it looks like (processor is missing): 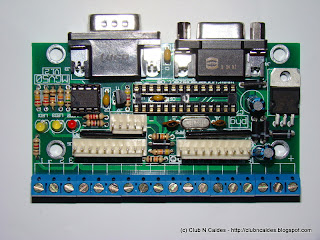 On the top there are Loconet DB9 connectors, male and female. You connect loconet bus in one of them, and extend to the next GCA50 through the second one.

In the lower part there are two 10 pin header connectors (white). That's the connection to Driver boards, so you can connect two driver boards per GCA50. Each connector delivers 8 Inpout/Outpus (it's configurable).

The smaller header connector in the center is used to direct programming of the microprocessor.

And in the lowest part there is a screw terminal. This contains exactly the same signals corresponding to Driver connectors, but in screw terminal form. Here you can connect directly devices (leds, reed, ...) but taking into account it's low power. Normally a Driver board is used because it hasn't enough power to drive any kind of switch, servo or whatever. I don't solder this connector because I never use it and it's one of the most "expensive" components. Anyway, NEVER solder directly here, and get used to connectors, they can save your life....

That's a GCA50 connected to a servo driver board: 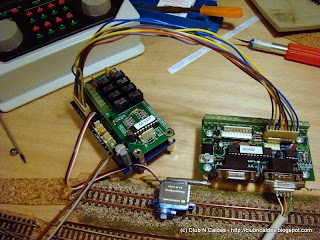 Now, in which ways can you buy this board??

1) I don't have money or I'm really skillful and I like electronics problems: Just download "pcboard and parts position" PDF file from Giling page, isolate your board and assembly. Download also HEX pic file and you are ready to go.
2) I'm not so skillful or I don't have a lot of money: you can buy only board, or board plus preprogrammed pic. But in my experience you will not get a cheaper bill than buying the complete kit
3) I know soldering, I like to build my devices but I don't want much problems: buy the complete kit (board, components and pic).

For more information, go to this Giling page: http://wiki.rocrail.net/doku.php?id=mgv50v1.2-en or surf his web site.

I finish just adding that programming is really easy (from Rocrail) and I had 0 problems in my five operative GCA50.