This is the first Driver board from Giling Computer Applications that I'll present you. It is used to detect position of trains through the current consumption of aisle track sections. And I start with this board because it'll be probably the most used in any computer driven layout. This is the completed board: 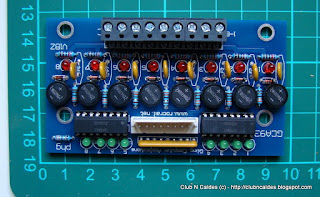 Main characteristics of the board are:


And the way to use it is really ease, like others: you connect the red wire that feeds one side of the track to the board, and cut and isolate the rail where you want the detection (the rail that was feed also through the red wire from the central station) and connect this rail to the board. You can connect maximum 8 detection sections. The printer connector is used to connect to GCA50 (in case of Loconet bus) and inform to the rest of the system (Central station, computer, other modules) that a piece of track is occupied by a train.

Just as a brief introduction about blocks, sensors and retrosignaling: It's really needed to detect positions of trains in your layout if you want to see trains moving in automatic mode. Computer must know not only when a train has arrived to the destination, but also where exactly is this and all other trains all along the way in order to block others and avoid collisions. Very often people only use detectors in stations, just in start and end points of the travel of the train. But in this way if you move a train, computer will block all the path or it will not start moving the train until it is free, so it'll be difficult to see many trains moving at the same time. The way sensors are situated is particular to the layout (number of trains, size of the layout, number and disposition of tracks, ....) but if you don't want to fail use detectors absolutely in all tracks with these simple rules:


Don't worry if you create too much blocks (there are never enough), you can always set up a block to do not stop trains if it's the case. The block is just a concept for your computer, it's a place where a train will stop or not, it will reduce to a certain speed or not, or a special train will avoid passing it just according to the rules you will set up in your control software. And blocks are split in detection zones (3 each block in a simple way), and these detection zones are physical. And for each one you need a sensor, and here is where GCA93 is needed. Each of these boards has 8 sensors, so with one board you can connect two blocks and a half.

This is the board before mounting components, it has a high quality finish and all components are well indicated. Everything is soldered through hole, no SMD components, so it's really easy to solder even for beginners: 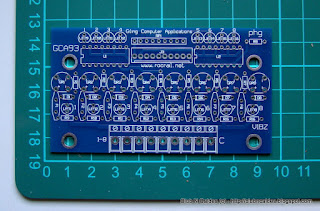 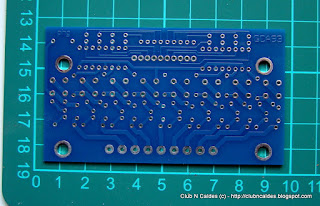 In some places where I don't have room enough for the GCA93 board plus the GCA50 (Loconet Interface), I put them in "sandwich", using 12mm spacers. For that, you have to use a different print connectors (the ones to connect GCA93 to GCA50). Just solder elbow shaped connectors instead of straight ones.

This is the front view of the GCA50+GCA93 when sandwiched, no changes to DB9 connectors on GCA50 nor terminal connectors of GCA93: 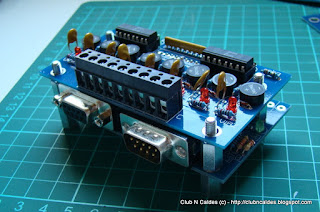 In the rear view you can see the elbow shaped connectors, the one of GCA93 must be soldered from the bottom, but there's no problem because all board holes can be soldered in both sides: 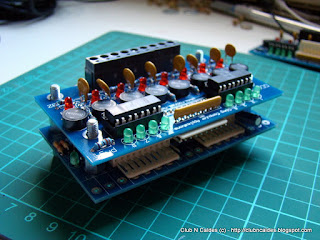 Detail of GCA50, as I said in GCA50 post I don't solder terminal connectors, they have no use for me in GCA50: 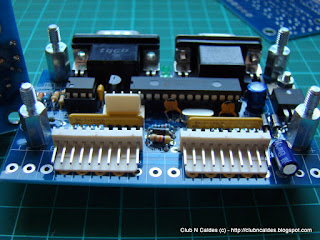 And detail of the GCA93, with connector soldered in the bottom: 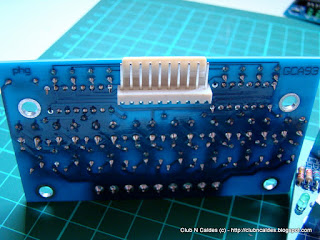 Here you see the differences between printer connectors, left one is elbow shaped, right one the straight: 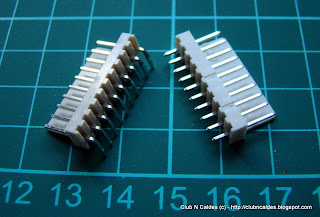 These are my GCA93 boards in charge of detecting trains in my hidden yard. One is sandwitched on GCA50, and the left one in a standard way: 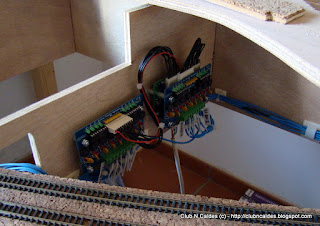 For more complete information or order boards or kits (board + components) look the official page:

In next posts, I'll show all the other Driver Boards from Gilling. See you!!