Today I tried for secod time to digitalize my Kato DE10 Cold Region version. Firs attempt ended up in a burned decoder, and I put again all the pieces inside of the box and forgot it for a while. I also tried to find a compatible replacement board to easily convert it to DCC, but the ones I found need to sand down a little bit the big lead blocks, and it means you have to unmount them. Too much work....

This time, the attempt was successful. Remove the top frame un-clipping it and pulling upwards. Take care, because the small black footbridge around the engine and the white handrails are not part of this piece. You also have to un-clip and pull up to take out that part after shell is removed. 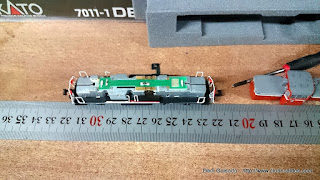 Then you have to pull out the clips that connect the board with the motor, and finally the board can be removed. This board takes the current from the lead blocks and feeds the motor and the lights. The SMD component in the middle is a 500Ohm resistor, and the one in a lateral a condenser that you don't need to remove. It will not interfere with the motor current, is just to avoid lights to tilt. 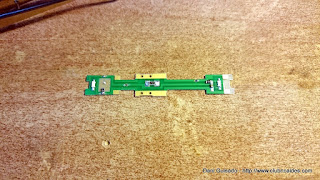 Cut the board as it is shown in the photo, the middle part will be discarded and in its place I will fit the decoder. I selected a D&H DH10, it's the exact size as the removed board section. 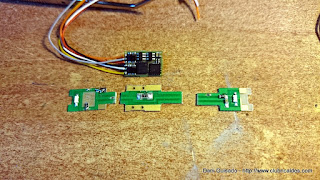 Here you can see how the parts of the board containing the led will be installed again in the same place: 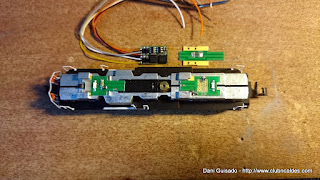 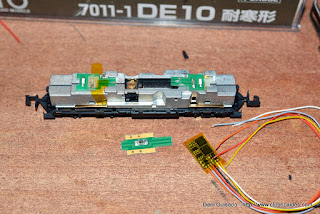 Now you have to isolate the current pick up cooper strips of the motor. In the side of the following photo (where the cooper strip appears from the bottom) I inserted a little piece of styrene to keep the strip separated from the lead chassis. In the other side, you just need to cut the strip so it doesn't arrive to touch the frame. 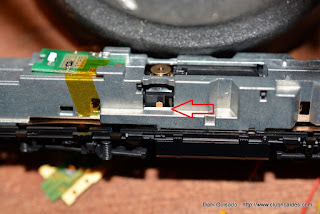 Now time to prepare one of the side parts of the board (the one containing the SMD condenser). It will end in three parallel tracks.Scratch a little fit the surface of each of the three tracks enough to see the cooper and tin it. The two exterior tracks will be the current pick up for the decoder, and on the centre track solder a 500Ohm SMD resistor and the wire to feed the lamp. In this way, the led will take the positive directly from the current pick up plates and you will feed the negative from the decoder output: 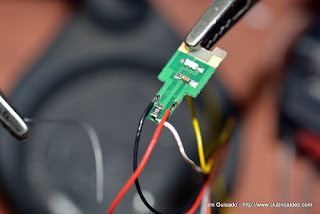 I recommend you to test each single step you do. Don't wait to finish all the work, put the locomotive on the tracks and burn it as I did the first time.... So I connected just the motor wires to my ESU decoder tester, and feed the previos board directly from the track with a crocodile clamps. 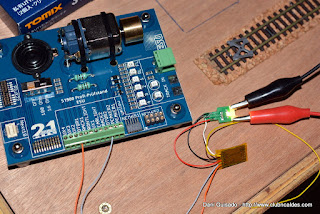 Engine was working ok, light ok, ..... let's go for the other board! Just a little bit more difficult. Left current pick up plate must be isolated (I use Kapton tape). The other, must be linked to the contiguous track to feed the positive part of the led. You can see in the photo also where to solder the function output wire from the decoder. Add a 500Ohm resistor also in between. 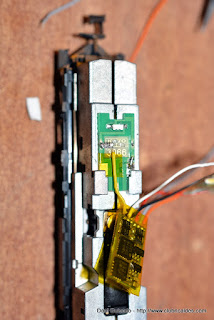 Finally, solder the motor wires to the motor cooper strips, and it's ready to test on track. 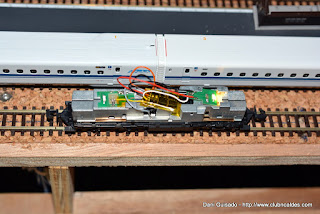 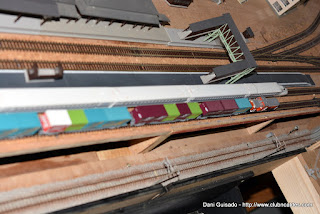 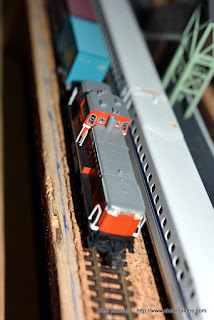 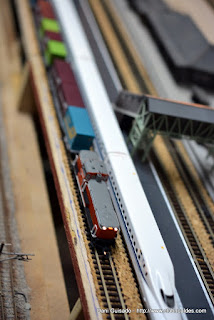