This is the Tomix 92214 model, including an ED75 locomotive and two Koki freight platforms: 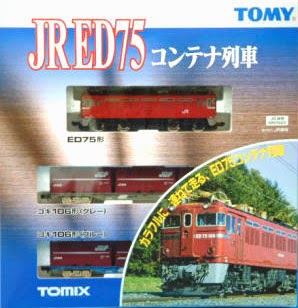 "The ED75-1000 subclass were built from 1968 for use on express freight services. 25 locomotives were built between 1968 and 1970, followed by a second batch of 14 locomotives built from 1973 to 1976, bringing the total to 39.  JR Freight started a programme of life-extension refurbishment of its Class ED75-1000 fleet from 1993, and refurbished locomotives were initially repainted in a new livery with the bottom half of the body sides finished in ivory. The livery applied to refurbished locomotives was subsequently simplified to just adding a white stripe along the bottom of the body sides." - Wikipedia source 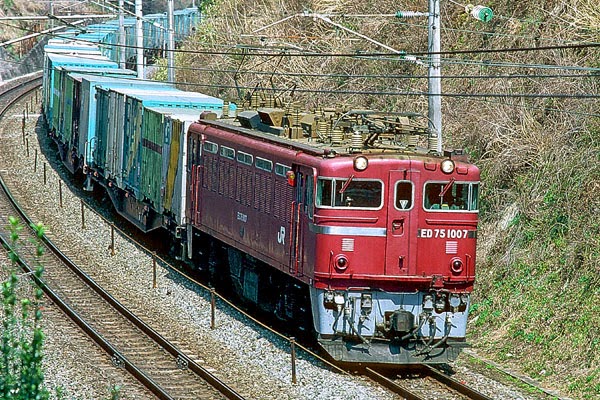 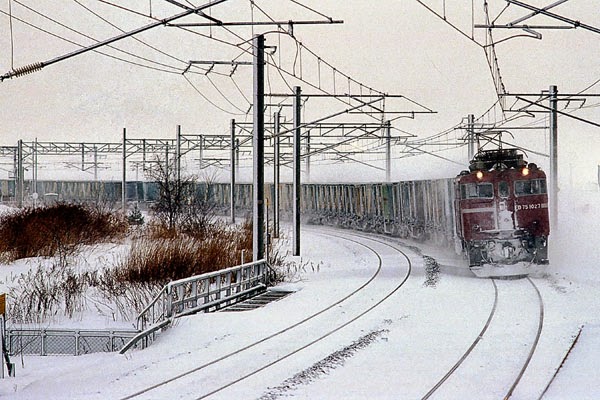 Disassemble is quite easy, just pulling the hull up. The two gray plastic pieces are also clipped. Then you have to unclip the bottom black piece between the boogies, and the two lead pieces will separate releasing both boogies and the led boards. 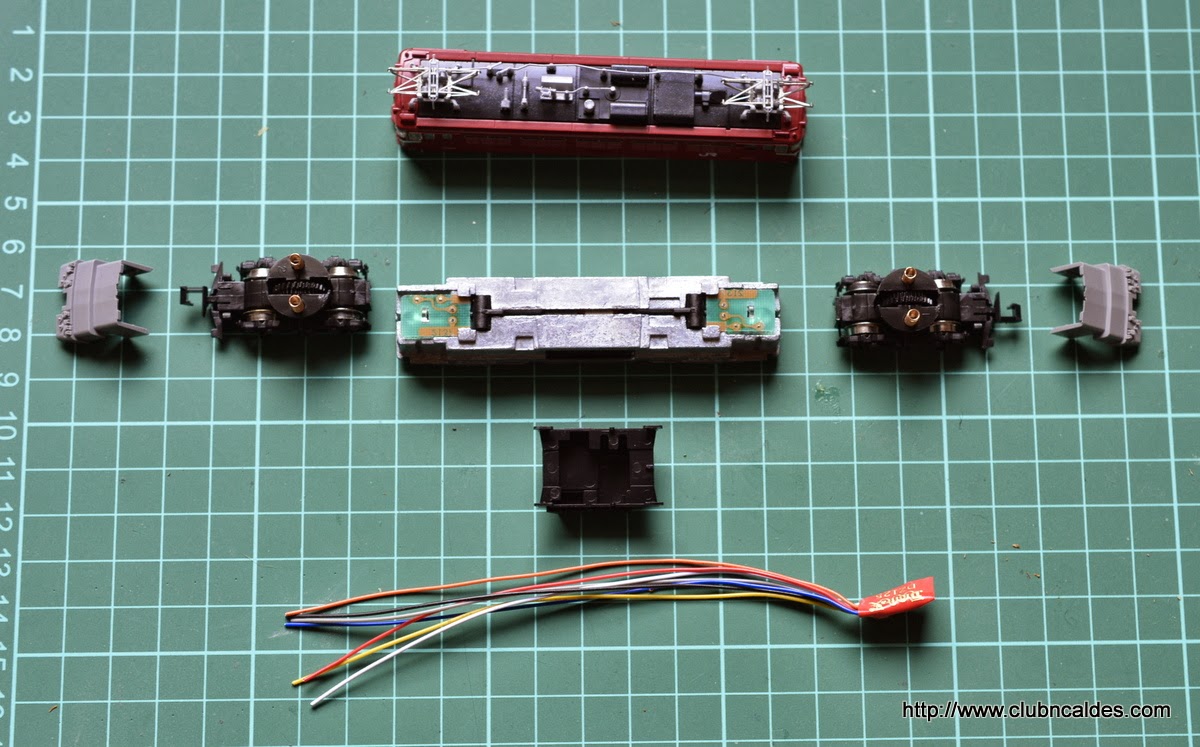 I spent a lot of time thinking where to fit the decoder, and finally I found the only possibility inside the plastic piece which clips the lead big blocks. 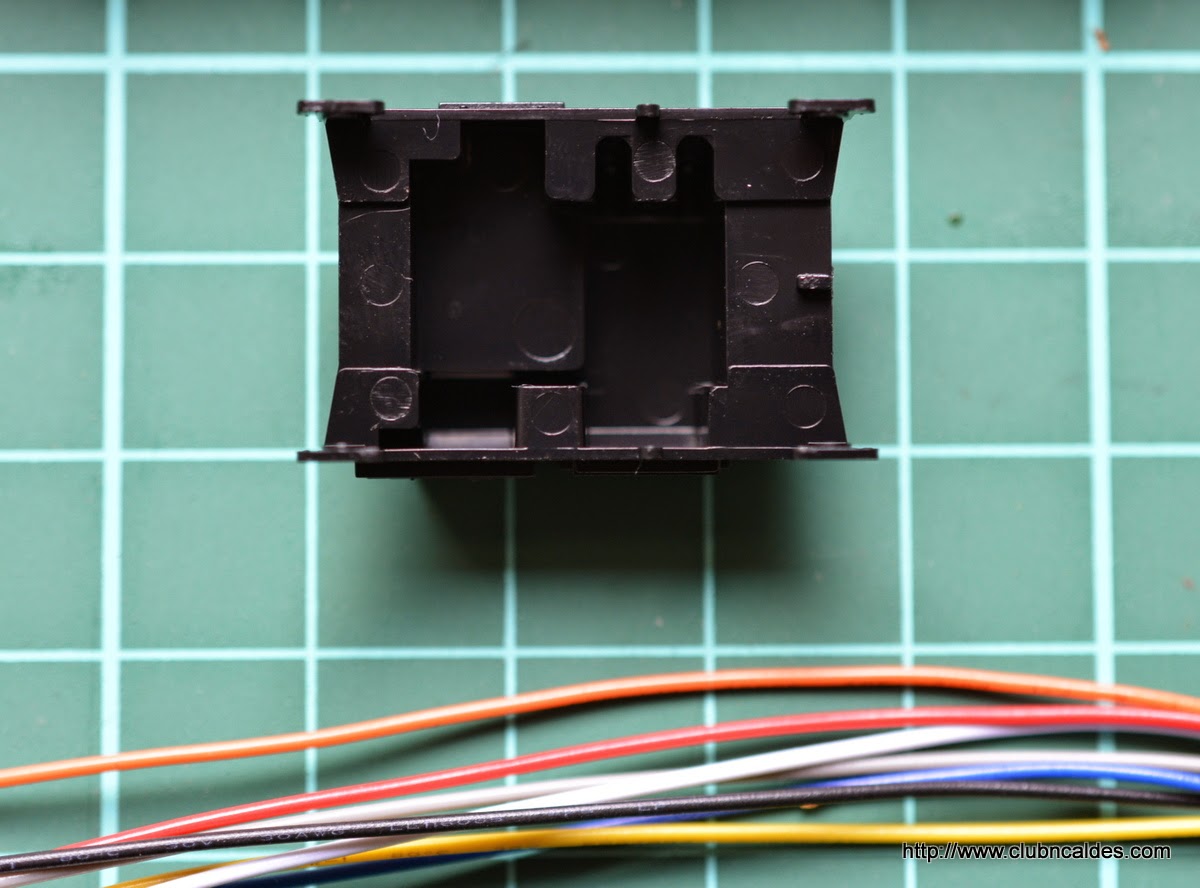 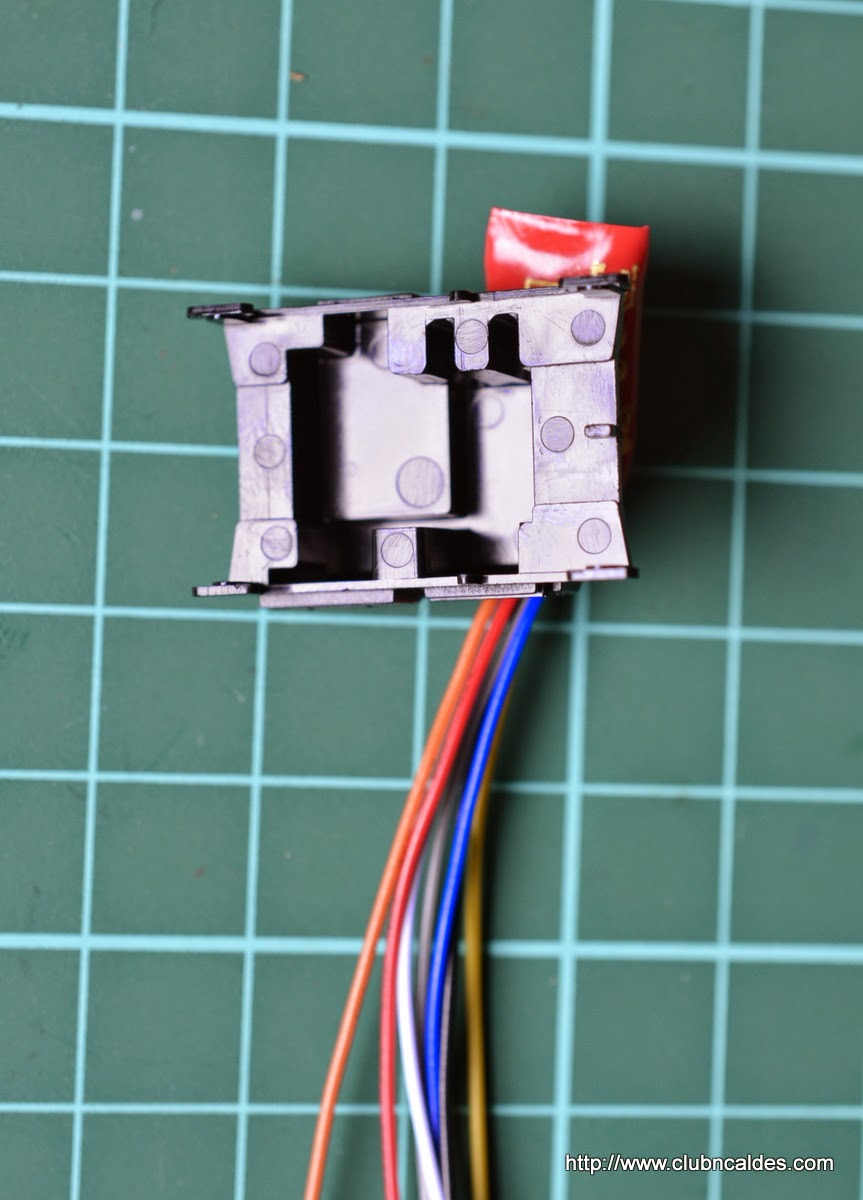 Anyway seems difficult, because the decoder needs more room, and that's one of the smallest in the market (Digitrax DZ125). The big metallic blocks also act as current conductors and seems difficult to isolate the engine and lights. And besides seems there is no place for wires!!! 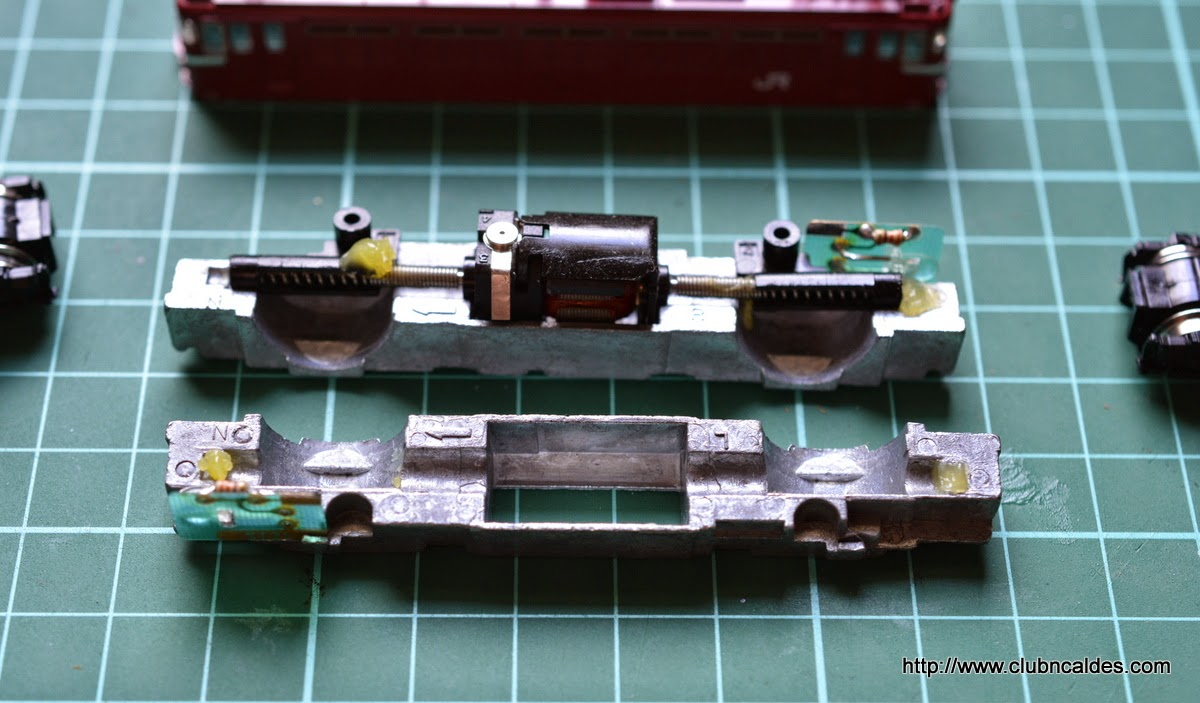 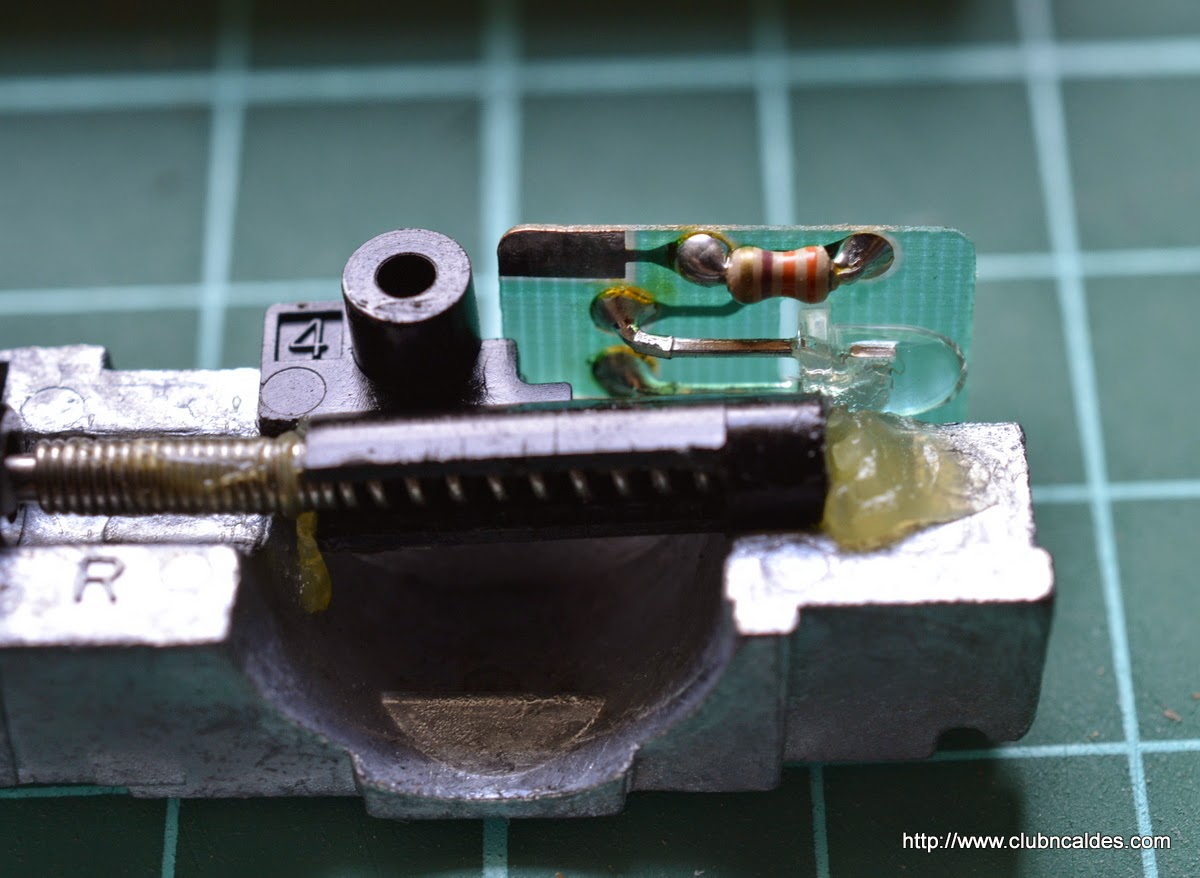 Then my idea was to use an even smaller decoder, the brand new model from digitrax. It fits perfectly and there is no need to sand anything. 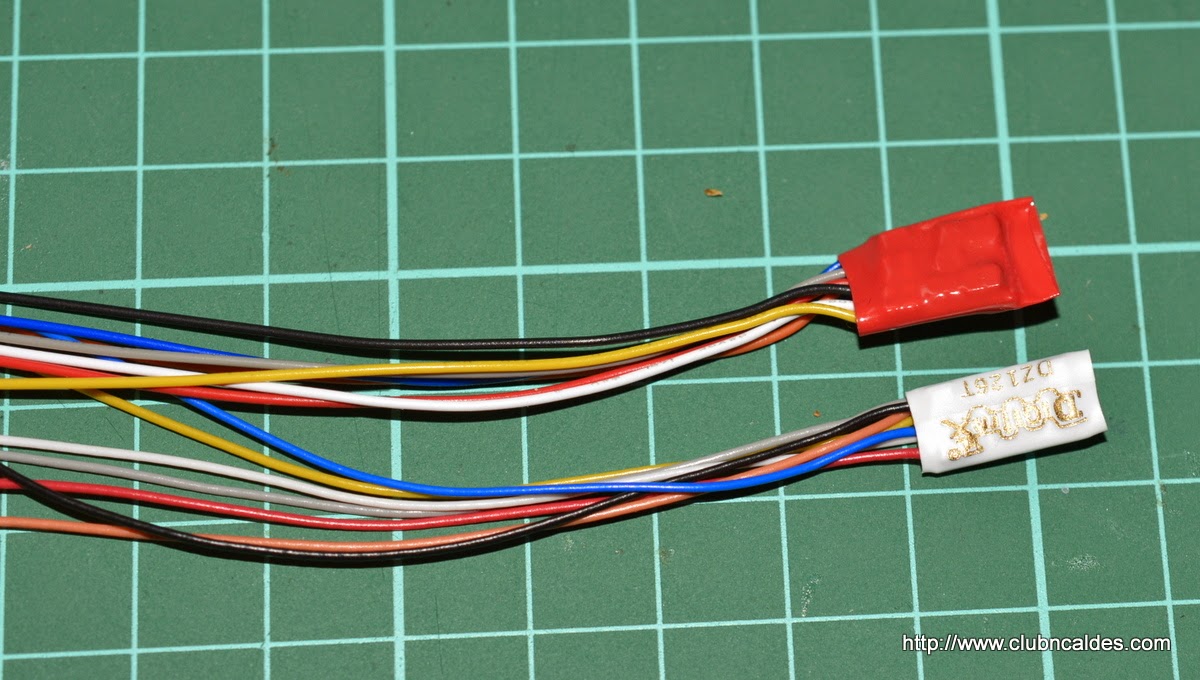 But once it was mounted, fitted and soldered, the decoder was faulty and giving always 17V to the engine, so I'll skip all this part of the installation... :((

Well, that was my plan, as there is no room for wires I'll use very thin brass strips. It's a solution that I never used before, and I think it will be my standard way of digitalize from now on. All the strips must finish under the locomotive in the small place where the decoder will be fitted. Soldering two short strips to the engine nose clips, they act also isolating them. 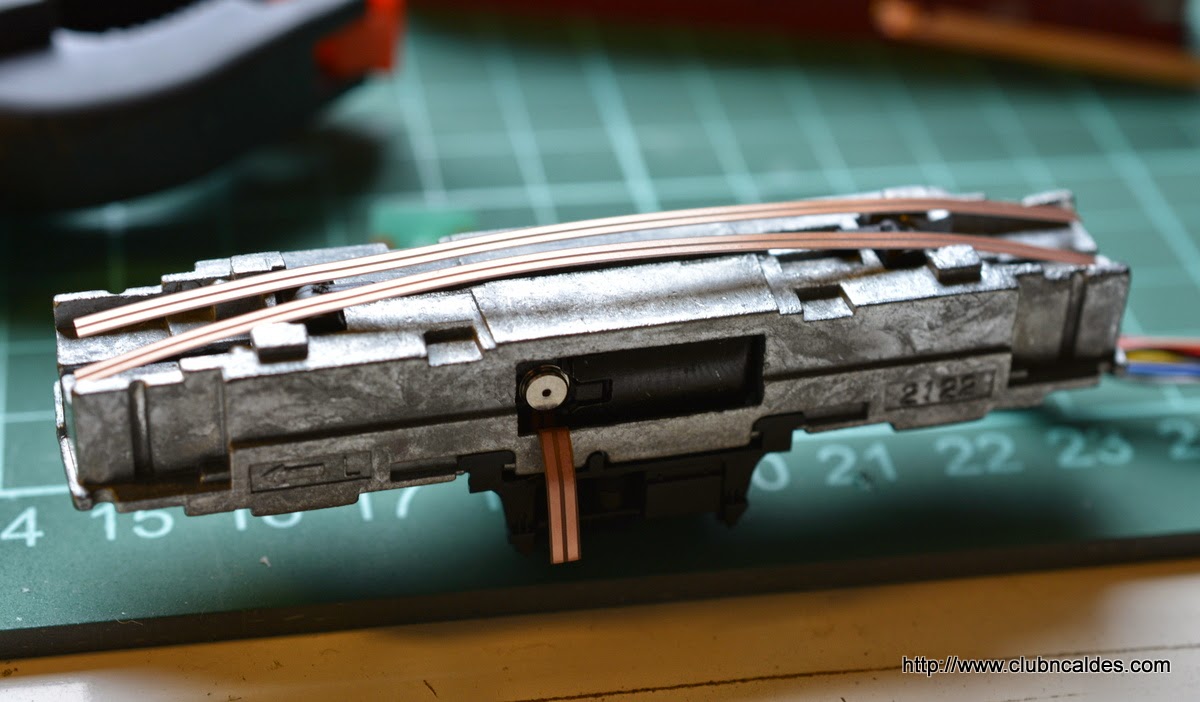 The second challenge is to replace the white leds and add a rear red light. The original model only comes with front light, but no rear one. 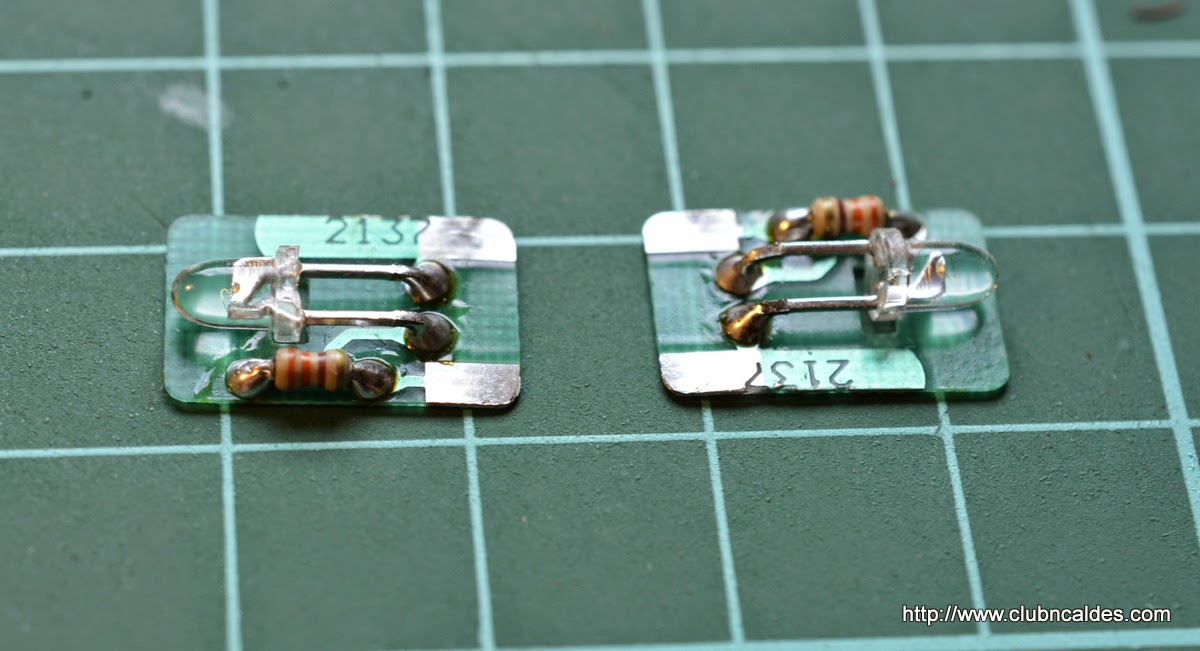 As there is only space for one led, changed them for a bicolor SMD led (red / sunny white), soldering it to a piece of the same brass strip and with a 1KOhm resistor: 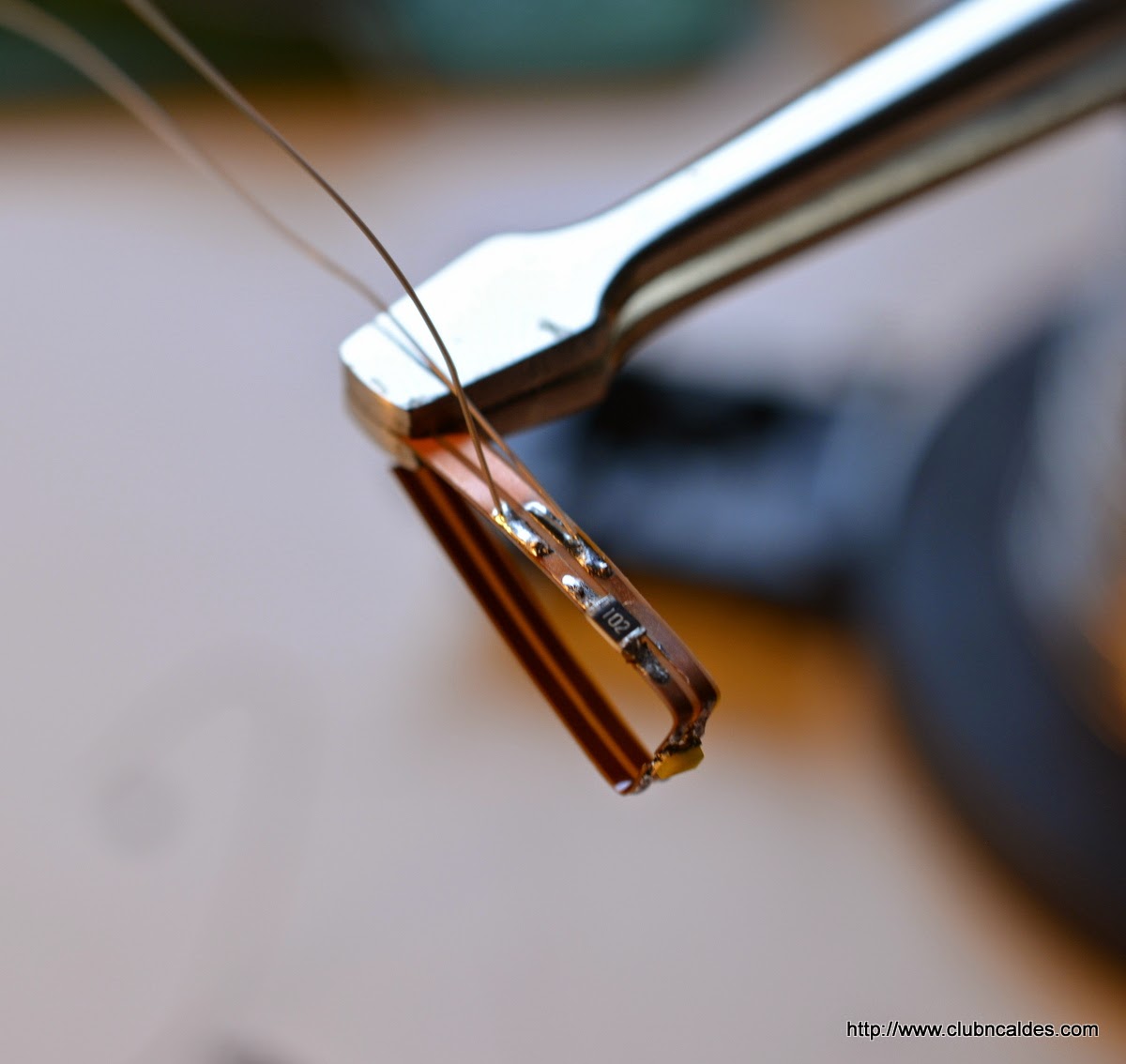 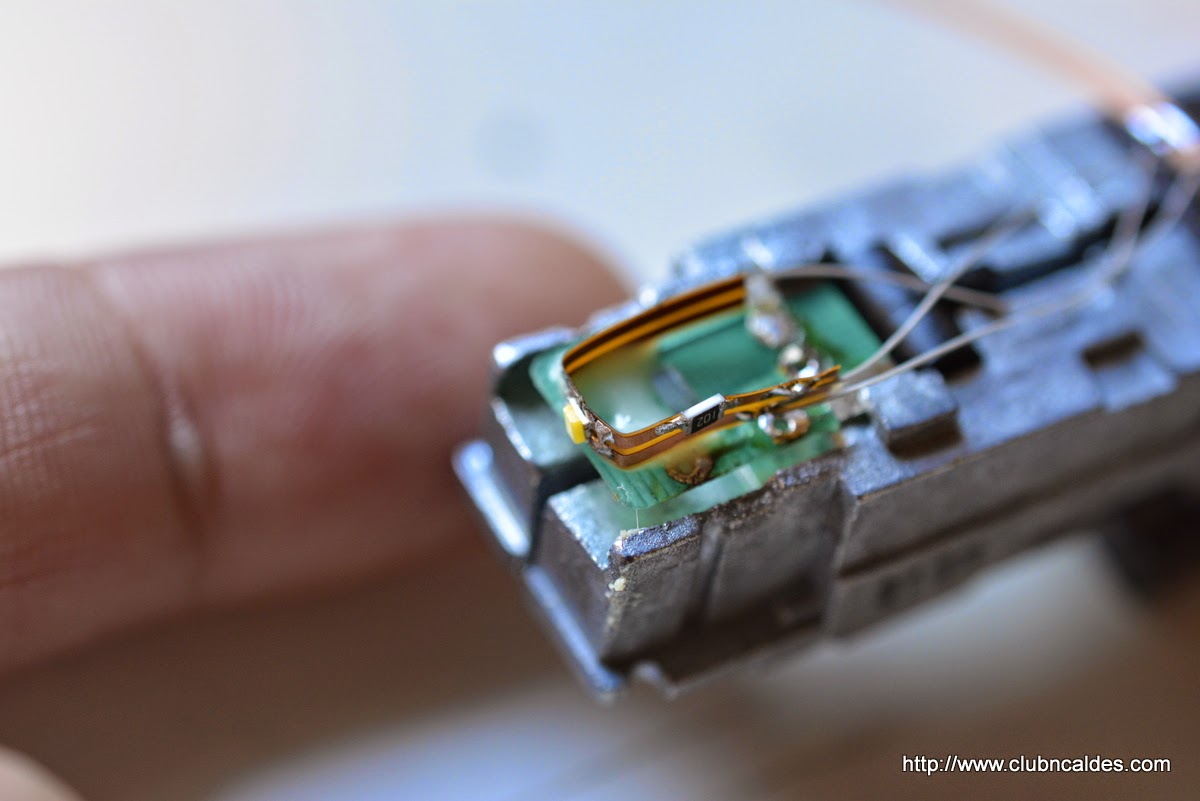 In the middle of the locomotive two brass strips will feed current for leds, and very thin wires will connect the feeding brass strips to the led strip. Led strip is bended and fixed with glue to the existing led boards after removing the old led and resistor. 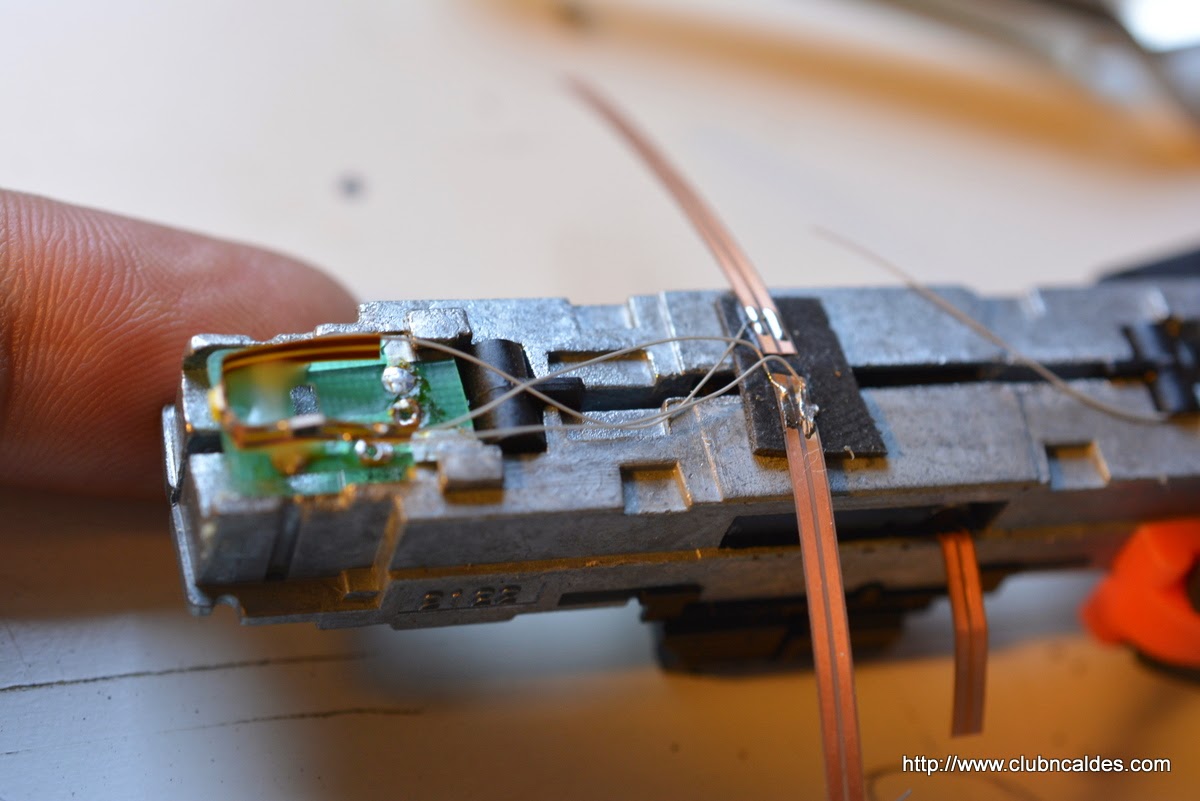 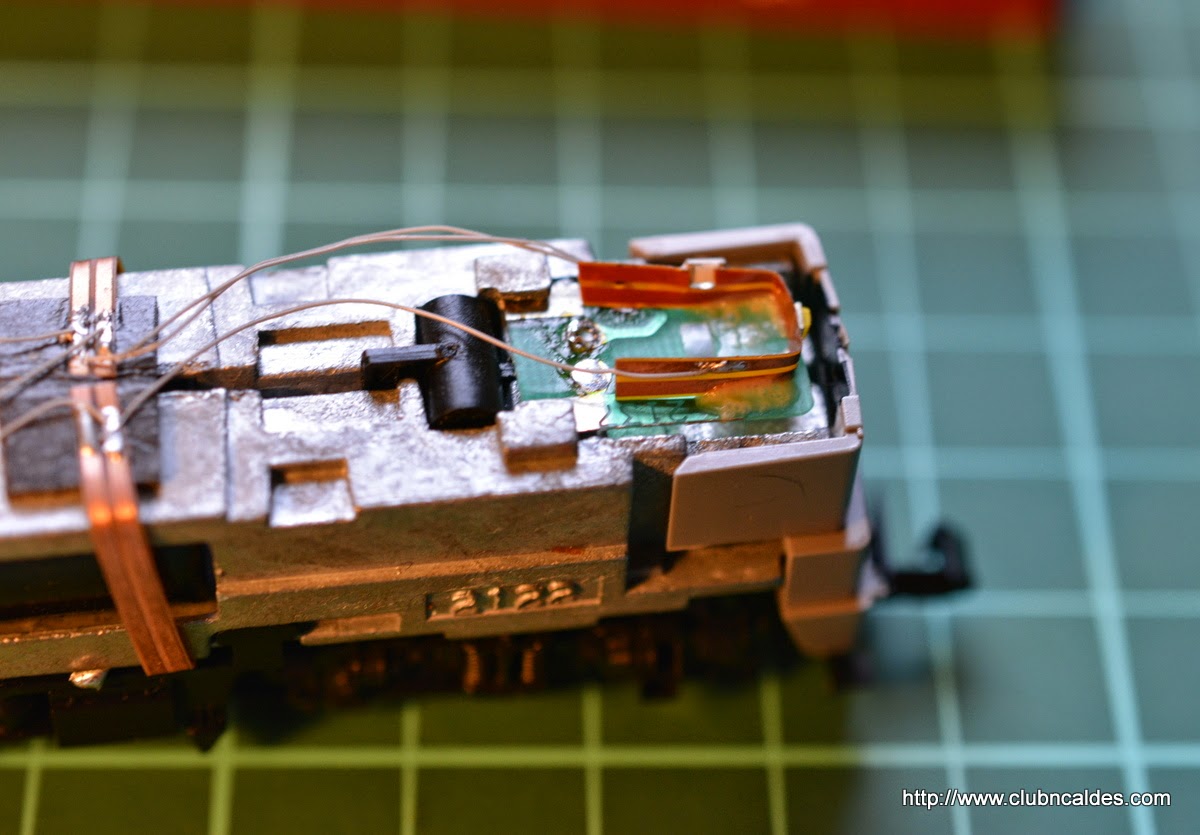 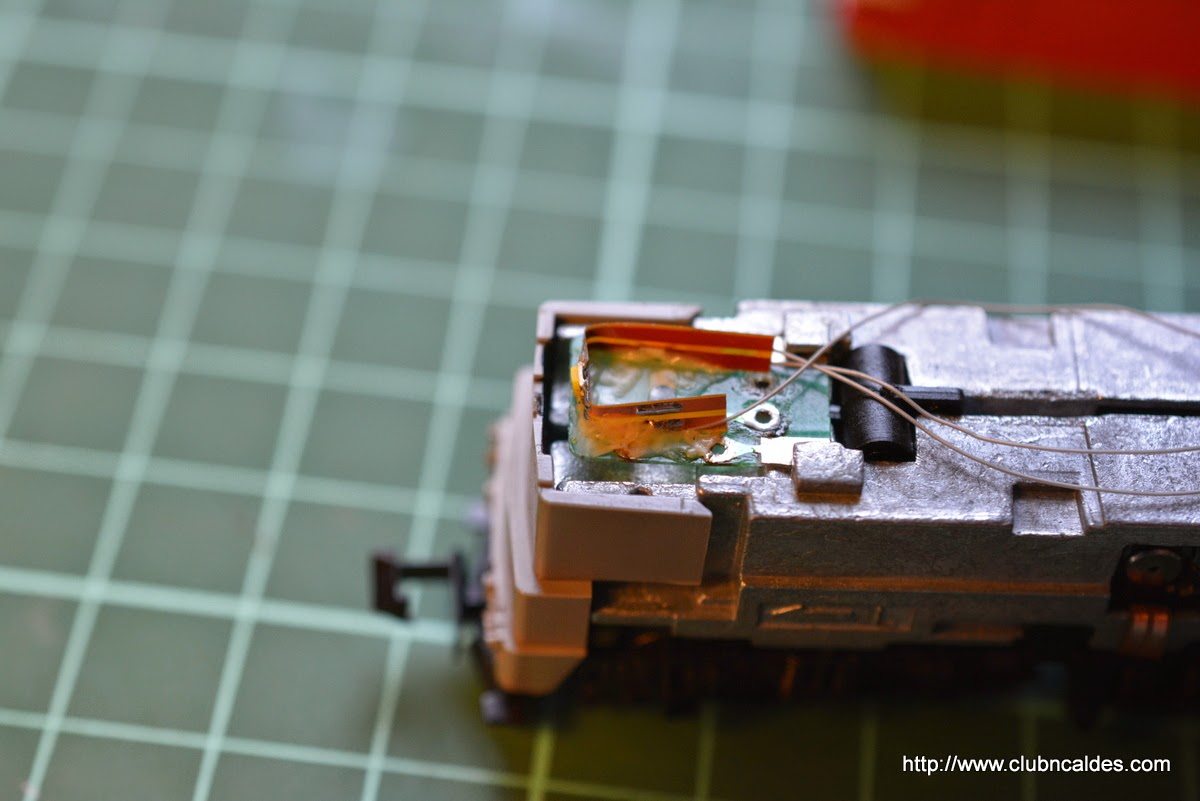 And that's the model ready to close and test. Just one update, the little piece of double sided tape had to be removed also, and the led boards installed in an inverted way, so the led is in the bottom of the board and not in the top: 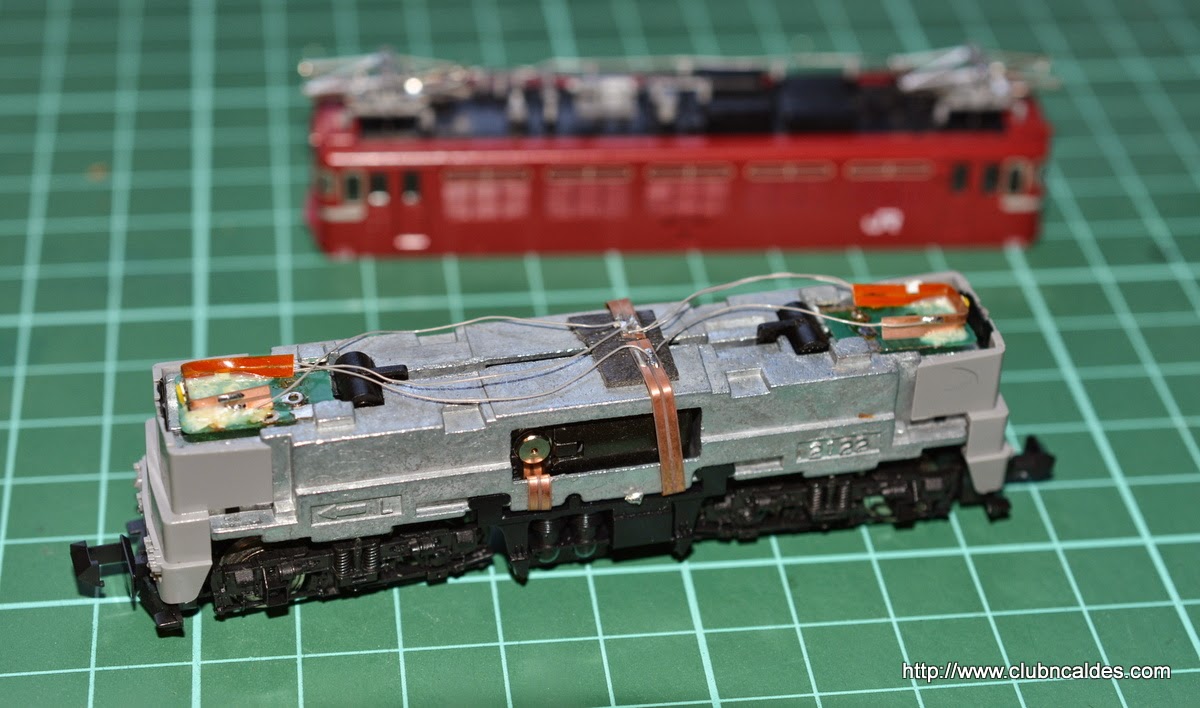 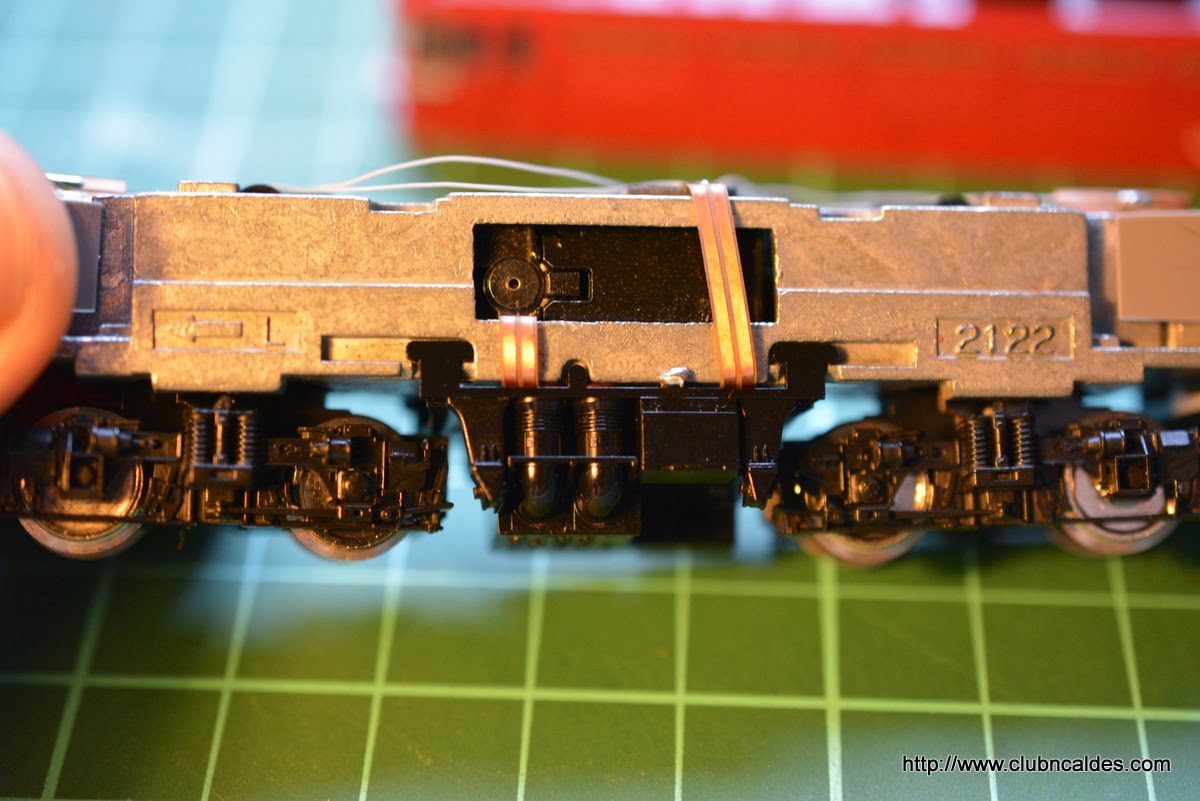 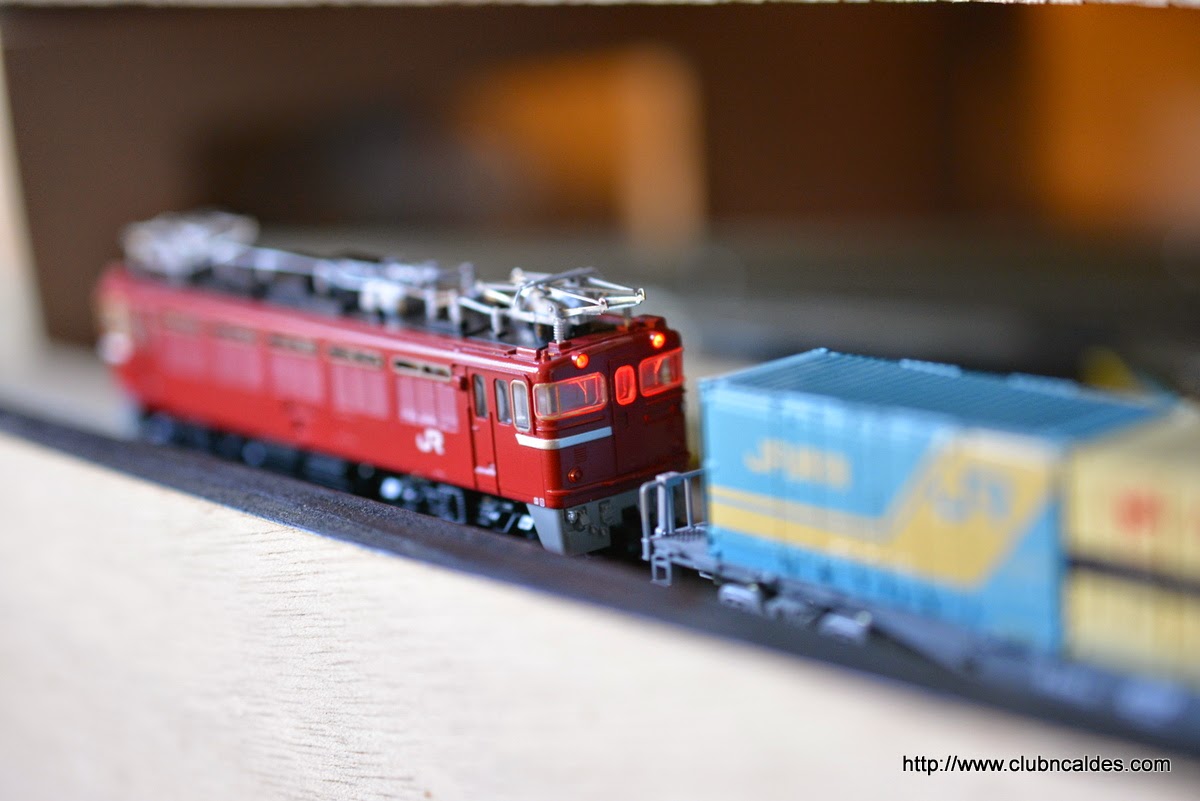 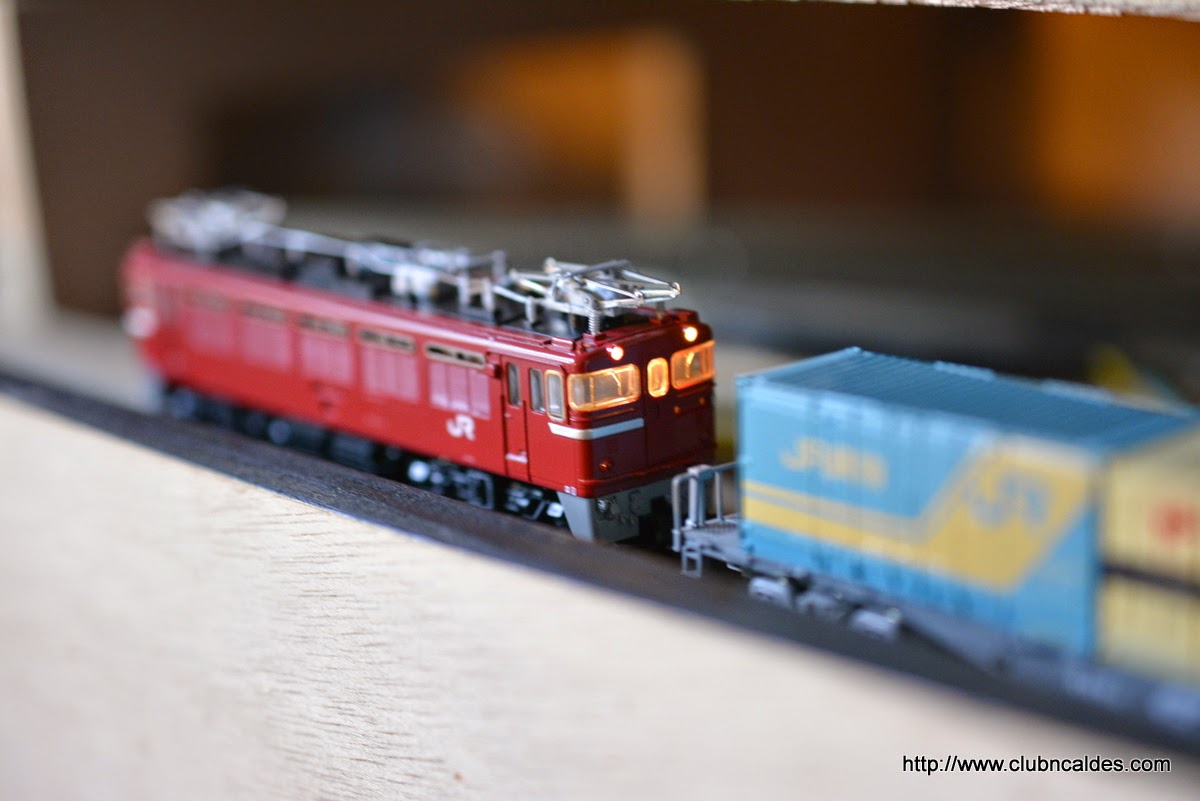 I heard Kato model is much easier to convert to DCC, this one really became a challenge and is the most difficult one I ever did. But the behavior and engine softness is amazing, despite I haven't seen Kato model.