I've seen many of these locomotives in Tohoku region, pulling long compositions of container platforms. That's one I saw in Noheji Station, travelling from Aomori to Osorezan. I guess it was a 3rd version as it hasn't the black line: 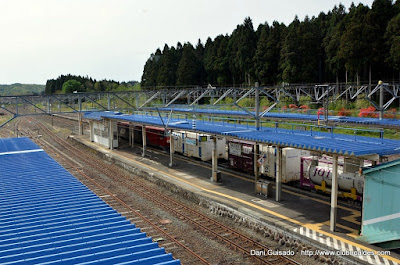 I like this locomotive very much also to pull my Tomix Track Cleaners, because they have 8 axles of big wheels, all them drive wheels and pick up current. Each bogie has one wheel with an adherent ring. All this plus the strength of the motor makes it a perfect locomotive to pull the heavy Tomix Track Cleaner car and never stalls on a switch. 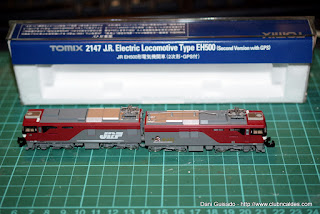 Opening the locomotive is quite simple. Pull out the centre double bogie using a small screwdriver as lever, and pull out also both car cases in the same way. There is a cardan joint between the two cars, only one of them has a motor engine. You can unfasten it also pulling gently. 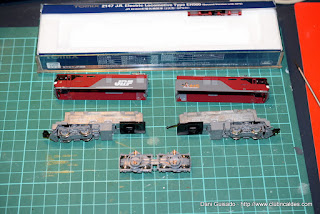 Unclip the plastic pieces on top and the plastic box of the bottom to remove the lead pieces from the motor. 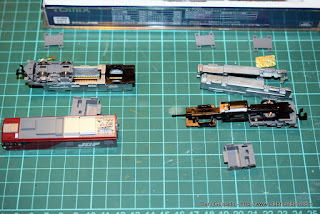 Now is time to plan the needed room for the decoder, a Doehler & Hass DH10 in my case. Tomix leaves no room in his electric locomotives, so the easiest way is to cut the top frame as you only need two millimetres thickness for those thin decoders from D&H. 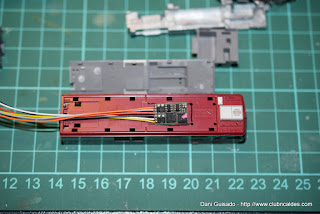 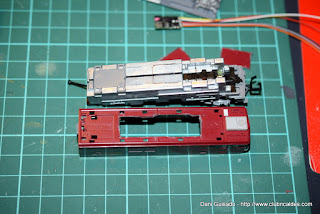 And before installing the decoder, TEST IT ALWAYS!!! There is no worse thing than installing a wired decoder and after all the work realize it doesn't work properly. 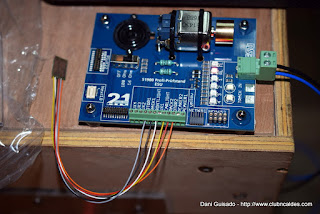 I use Kapton tape to isolate decoder from metallic parts, also the lead around the motor and motor pick up cooper strips must be isolated. Solder gray and orange wires to the motor engine, and make sure they are properly isolated before closing again the lead pieces. 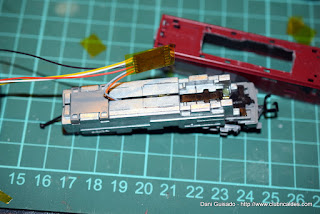 Lights are extremely easy, just cut the negative leg of the led and connect it to the white wire. Light board needs no further changes, just put it in place again. 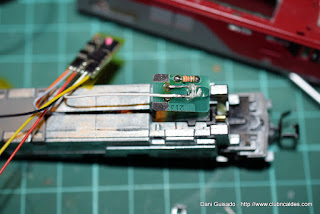 Red and black wires (current pick up) are not soldered, just tinned and put under the plastic clip on the opposite side of lights. The plastic clip keeps them in touch with the lead frame. 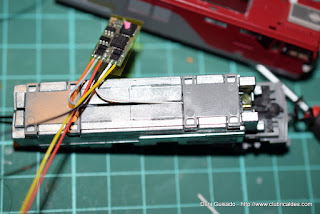 Now it's ready to test before attaching it to the other car. 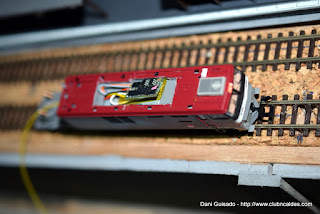 And finally you only need to solder yellow wire to the other light board in the same way you did with the white wire. Remember to pass the yellow wire through car doors to cross to the other car, and make sure it's not in touch with the cardan joint.