I bought this second hand Kato EF200 model model in an auction. At first sight I was a little bit disappointed because it arrived without any of the accessories (couplers, horns, plates, ....), but looking it closer it had all accessories already installed and some nice and extra enhancements like front and rear hoses and details painted like the top of the pantograph and steps. 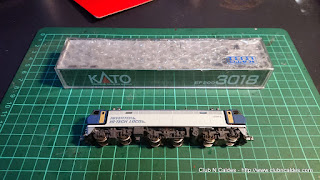 The light board was also changed, with only one led and the resistor changed to a value adjusted for analog operation: 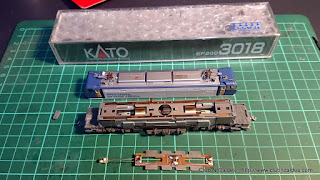 My first idea is to use a D&H DH05 decoder, as it fits perfectly in the space under the pantograph plastic piece. 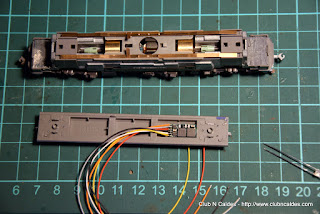 I changed the resistor by a higher one, 680 Ohm, and installed new led in each side. I had to solder them two times as the length has to be really precise to allow closing the case (in following photos you can see the exact and final shape I installed the led). I only soldered the positive lead of the led to the hole were it picks up the current after the resistor. The negative lead will be fed by the decoder function wires (white and yellow). 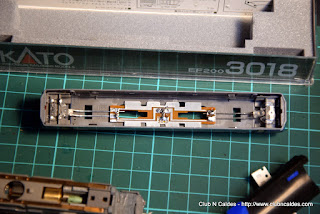 Remember to isolate with Kapton tape the current plates in the point were it could make contact with the motor plates. Same for any other metallic part like led terminals: 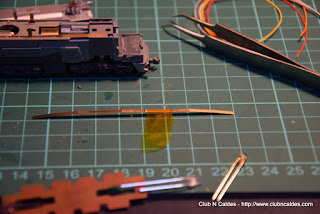 With cooper plates and light board in place, I tin the points where the decoder wires will be soldered, I cut the decoder wires to the right size and tin them, and solder the decoder in place:
You can see you don't need to disassemble completely the locomotive, there is no need to access directly to the motor! 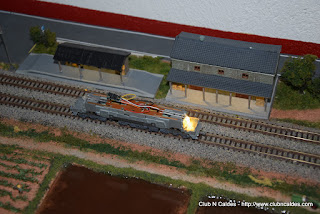 The following is the final position of the led, bended 90º: 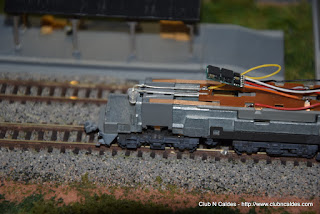 And that's the final step mounting again the locomotive, check the point where to solder the current pick up wires (red and black) as in this way you don't need to trim or sand the shell: 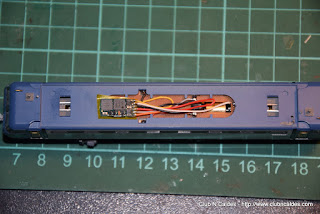 And the final result! 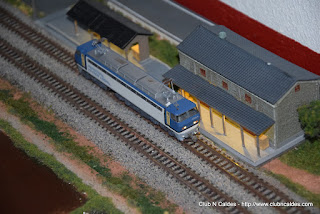 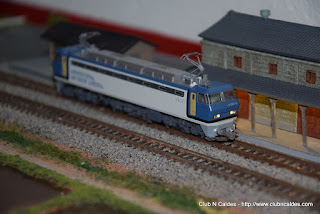 NOTE: After 5 minutes run, the Kapton tape was not properly installed and the rail current and motor wires caused a short-circuit. The decoder burned, and I replaced it by a Zimo MX616. I'm in love with this decoder!!!! 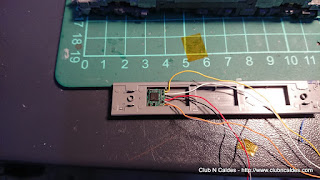